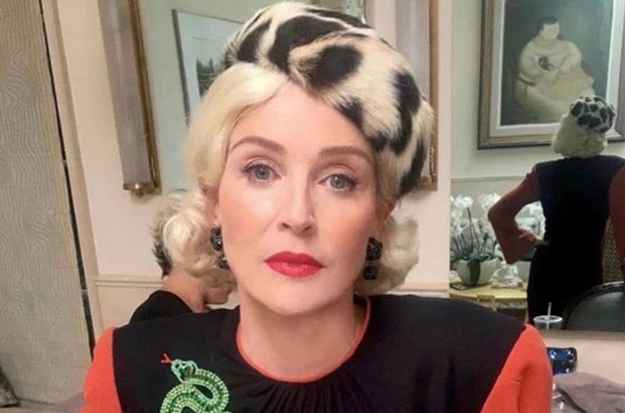 Many Sharon Stone fans will remember her from the 1987 movie Fatal Attraction with Michael Douglas. The lady looks as good today as she did back then! Sharon has recently starred in the Netflix series Ratched, alongside Sarah Paulson, Cynthia Nixon, Judy Davis and Finn Wittrock. The series is basically a prequel to the classic horror movie, One Flew Over the Cuckoo’s Nest. Sharon recently thrilled her fans by posting an image of herself, standing by a swimming pool in a bikini. In fact, it is almost impossible to believe her age!

Sharon Stone has always had a beautiful figure and she obviously looks after herself. She looks amazing in her role as eccentric heiress Lenore Osgood in the Netflix series. Since seeing her in Ratched, her fans have been praising her for her remarkable appearance. The series was created by Ryan Murphy and, according to Sharon, he wrote the part of Lenore just for her.

In an interview with AARP, Stone said she took this fact very seriously, as Murphy has written great parts for great women in the past. Sharon continued, saying for older women like herself and Jessica Lange (American Horror Story), she feels he continues to write such great work.

While fans know Sharon is gorgeous, this didn’t stop them from being amazed at the bikini photo she posted to Instagram. She poses by the pool, showing off her washboard abs in her tiny bikini. For some reason, the Ratched actress is sporting a full head mask. Sharon captioned her image, “Keepin my head together.”

Fans instantly responded, telling her “Still got it, Sharon.” Another fan wrote, “You’ve got a great body” while yet another asked, “What is your diet, you look amazing?”

Hello! quotes an interview with Shape, where Sharon opened up about her exercise and health regime. She said, “Every time I exercise, I do something different based on which areas need to get in motion.”

Healthy diet and a healthy body

It turns out, Sharon works out four or five times per week, using a variety of different exercises, including dance and yoga. She also avoids caffeine and alcohol.  According to Stone, she drank so little anyway. However, seven years ago, she was in training and wanted to really improve things.

Stone said she looked at Madonna, who is the same age as she is and asked her trainer, “What am I not doing? Find out what she’s doing!” Her trainer came back to her, saying she didn’t think Madonna drinks any alcohol. This led Sharon to decide to try “zero alcohol for three months” and she really saw a huge difference.

The Ratched star admits that, while she is healthy, she does enjoy treats every now and then and doesn’t restrict herself. Sharon admits she doesn’t eat a lot of processed food, but she hasn’t been able to get potato chips out of her mind! We hear you, Sharon!

Readers can binge-watch Season 1 of Ratched on Netflix right now.