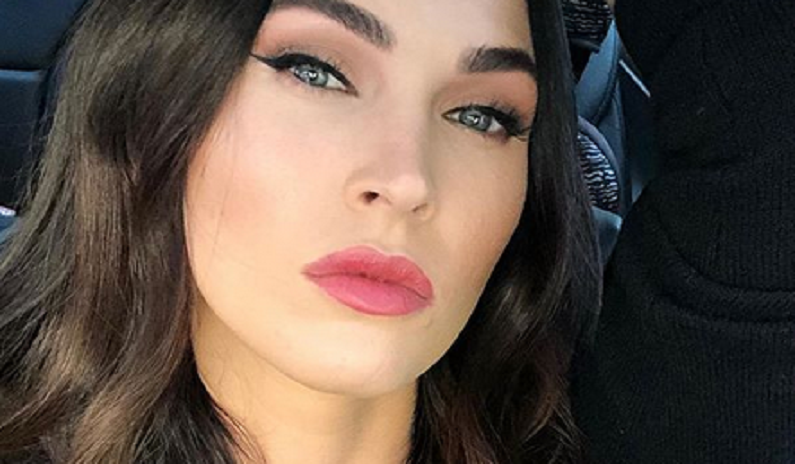 Megan Fox posted on Instagram for the first time in two months. The sultry stunner shared a behind-the-scenes clip of herself. In the video, she licked her fingers and mouthed along to Machine Gun Kelly’s music. The couple has been reportedly dating for months.

Megan is fresh off her split from ex-husband Brian Austin Green. Lala Kent and Randall Emmett helped set her up with Machine Gun Kelly, whose real name is Richard Colson Baker. Ever since the sexy actress set her eyes on the “Bloody Valentine” singer, it’s been kismet.

The two have been inseparable since. And now Megan is teaming up with Kelly again in another music video.

On Thursday, October 1, Megan Fox broke her two-month Instagram silence. The New Girl guest star shared a clip of herself licking in between her fingers. In the background, fans can hear one of Kelly’s songs off of his new album. Megan has on a colorful sequined hood with a dramatic black choker.

Her beautiful blue eyes are accompanied by her signature red pout. In the caption, Megan calls the tune “one of my favorite songs.” The Jennifer’s Body star also took the time to promote Kelly’s deluxe album. In the post, she lovingly refers to him as her “Lambly.”

The deluxe version of Lamby’s @machinegunkelly album is out now This is one of my favorite songs 🖤 💔 My audio is shitty because technology hates me. Also don’t worry I’m dressed like this not because I’m at an x-rated cosplay convention but because I’m on set for @netflix #nightteeth 🧛‍♀️🩸🕸 #bodybag

As for the sexy outfit? She joked that it’s “not because I’m at an x-rated cosplay convention but because I’m on set for @Netflix #nightteeth.” She also included the hashtag “#bodybag” in the video.

Megan Fox is hardly active on social media. It’s rare to get even a selfie from the seductress. Ever since she posted the clip on early Thursday morning, it received over 1.8 million views. It has also thousands of likes. There’s no doubt that Megan’s fans have repeatedly watched the clip because they’re mesmerized by her.

Megan Fox and Machine Gun Kelly’s relationship is still going strong. They packed on the PDA in the music video for Kelly’s “Drunk Face.” It includes raw footage of the rapper’s life leading up to the release of his Tickets to My Downfall album. The video also includes scenes of himself out on the town with the Teenage Mutant Ninja Turtles star.

In one of the scenes, the two board a private jet together. In one scene, Megan paints Kelly’s nails. Another scene shows the couple holding hands as they walk through a crowd of paparazzi. Fans can also see a glimpse of Kelly’s daughter in the music video.

The video comes after Kelly released the music video for “Bloody Valentine,” which also featured Megan. In that video, the Transformers star ties Kelly up and tapes his mouth shut with pink duct tape. Then she seductively sings along to the lyrics.

The couple met on the set of their upcoming film Midnight in the Switchgrass. They were first linked in May when pictures of them hanging started circulating. This led Megan’s estranged husband to confirm that they separated last year after 10 years of marriage.