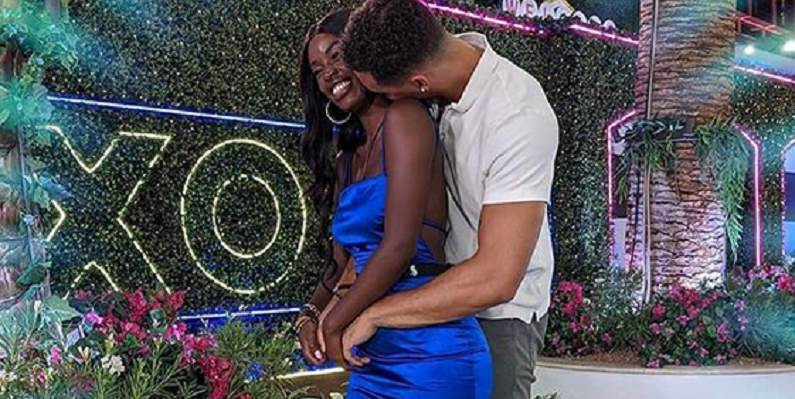 Love Island USA Season 2 winners Justine Ndiba and Caleb Corprew are making moves. They broke history as the first-ever black couple to win the dating competition series. Now, they’re discussing their future together, which they are “very serious” about.

Justine and Caleb won America over with their love story. They had a healthy relationship that gave people major relationship goals. In an exclusive interview with Entertainment Tonight, the couple admitted they’re surprised by the reaction they received. Caleb joked that he’s not sure how to handle this newfound fame.

What’s next for Justine and Caleb? They hope to build a future together, but when the time is right.

Justine and Caleb are “very serious” about their future

The Love Island winners live in New Jersey and Los Angeles. But they want to make their long-distance love work. But they haven’t made their relationship official yet. This might come as a shock to fans who heard them say “I love you.”

“We’re still taking our time out here as well. We didn’t let winning and making it to the end change anything between us, which is why we were able to share how we felt about each other but still not rush to put a title on things even though I think we are,” Justin explained to ET’s Ash Crossan. “I get impulsive sometimes because I think most girls are.”

She explained that Caleb has been “realistic” about their coupling. They agreed to work on themselves and their careers. Then they will “make those right moves when the time is right.” It’s just one of the many mature conversations they had about their future.

What’s next for the Love Island winners?

Long-distance relationships are common and can work. However, it would have to take both parties to make it happen. Justine and Caleb revealed they’re already planning their next trip after their Love Island responsibilities end.

“The second we get our phones back, we’re talking about flights,” Caleb said. “We’ll probably see each other in a couple of weeks. We’ll probably keep seeing each other, so we can figure out a way to be in the same place — or at least the same vicinity.”

Spotted- the King and Queen getting ready to begin their happily ever after! What an experience this has been, but it's time for me to say my goodbyes! And who am I? …that's one secret I'll never tell! You know you love me! Xoxo -page runner 💋 . . . . . . . . #teamjaleb #queenjustine #teamjustine #loveisland #loveislandusa #cbs #cbsallaccess #igotatext #winner

Not only are they the winners of Love Island, but they also win $50,000 each. Justine and Caleb talked about what they’re going to do with the money. The couple had their last date in the villa, which included a helicopter ride. Caleb joked that he will have to top their next date.

“I’ve been saying that I have a really fancy helicopter date that I have to top so I feel like I may just ball out on one really crazy date,” Caleb said.

“He’s going to take me to the moon,” Justine joked.

“Yeah, I was thinking about taking her to the moon. Maybe a submarine ride, I don’t know,” Caleb added. “Something low-key.”

But one of the best things that came out of Justine and Caleb’s relationship is the portrayal of a healthy black love, which is rare on reality TV.