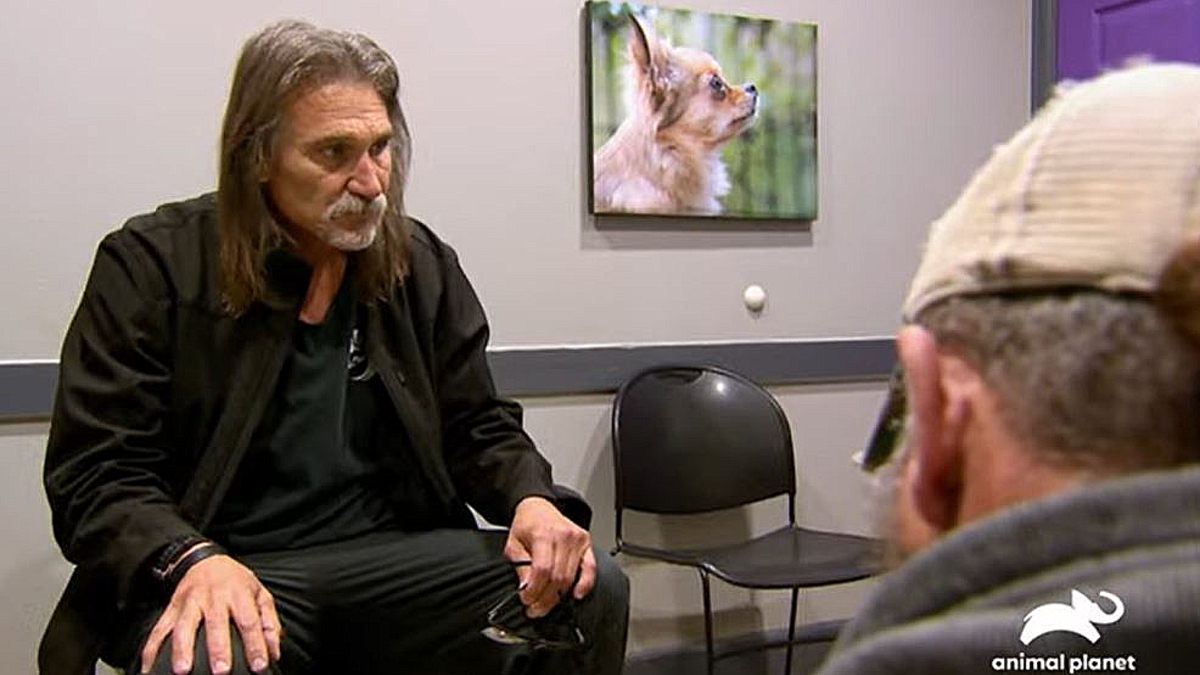 On the next Dr. Jeff: Rocky Mountain Vet on Animal Planet, the caring vet consults with a dog named Moose, he is his last hope after Moose jumped from a moving car on the highway and his owners were facing financial ruin.

This is sadly a common theme these days and the issue arises for pet owners at their most vulnerable time. They are not rich people and an $18,000 bill is just ruinous.

What happens when a beloved pet is in an accident or is sick? Pet insurance is expensive and it does not cover everything that can go wrong.

Making it worse is the financial pressure that COVID-19 and the rollbacks on employment, as people are stretched and hurting right now.

Their hearts are ripped out when they have to decide whether to eat and pay the mortgage or pay for a vet bill. The next episode shows a scenario many of the viewers can relate too.

In TV Shows Ace exclusive preview for Saturday night’s all-new Dr. Jeff episode, we are in the consult exam room with Dr. Jeff and two very upset owners and Moose, their injured dog.

Adorable little Moose jumped out of their moving car and broke his leg. The family almost lost hope because they couldn’t afford the fee from the first emergency veterinarian hospital they went to in hopes to fix Moose.

Dr. Jeff gives them hope the dog’s leg does not have to be amputated and comes to the rescue with far more affordable care for the dog the owners clearly love to pieces.

The clips opens with Dr. Jeff consulting with the clearly distraught owners.

Looking at the x-rays, he says: “So I think this is the broken leg…it’s pretty swollen okay [the] lungs look good, [the] diaphragm’s intact…” He shows the couple that the film reveals Moose has a fractured leg.

Dr. Jeff also notes that Moose was spared a lot of potential soft tissue damage, noting that his skin was not really ripped up like it could have been.

He reassures the couple and says: “I’m surprised because that road rash can just be like sandpaper or, you know, taking a grinder to the skin.”

The owners are relieved and share their story. After the accident, they took Moose to the nearest emergency 24-hour care because they didn’t know what else to do. And their initial bill was estimated at $18 000, which included them removing Moose’s leg.

Dr. Jeff is confident he can set the bones in place and feels there is not enough soft tissue damage to worry about a blood supply.

He says: “In all honesty…there’s always things that can happen, but you know until you get in there and put things back together it looks like it should lock in pretty good. But we’ll see how it plays out once we’re in there. We definitely need to get the swelling stabilizer and get that leg wrapped up so it doesn’t move around a whole lot more…and you’re probably looking at around, you know, $800 kind of thing.”

This is the news the owners needed, Moose’s leg likely saved and a bill they can afford.

Moose’s mama is in tears and says: “I’m not ready to lose him yet so I’m very grateful that I can actually afford to save my own dog.”

Later in the episode, there’s an unexpected surprise for Dr. Don when he discovers what’s making one man’s best buddy very ill. A couple of rescue guinea pigs cause a ruckus around the office. And Dr. Jeff heads out to a ranch with Hector to cure a mini-horse with an injured jaw.

Last week we met Ozzy the senior abandoned pet, a dog named Leyla, and Sookie, a husky who lost a fight with a porcupine.

Other stories this season include Dr. Jeff and the team providing free care to a group of loveable Fainting Goats destined to become therapy animals and coming to the aid of pet owners in a remote jungle village in Panama with a free spay and neuter clinic.

Later this season, Dr. Jeff looks back on his 30-year ride as a vet, and the challenging decision to set up a low-cost, high-volume veterinary practice, where no two days are the same, and a sudden emergency can push the team to its limits.

Tune in to see how Moose heals up on Dr. Jeff: Rocky Mountain Vet: