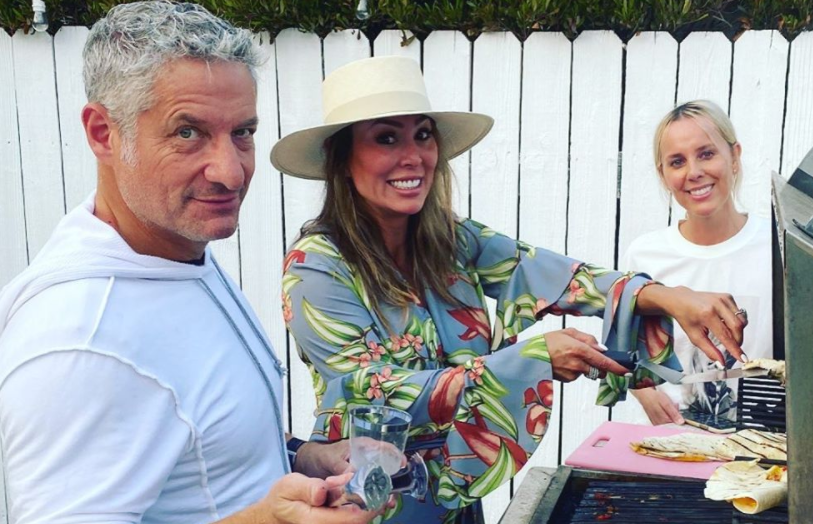 Kelly Dodd posted a video on Instagram with her man Rick Leventhal. In it they start out sending their prayers for Napa because of the devastating fires they are currently fighting. She captioned the post, “As if things couldn’t get any worse! Pray for Napa !! Thank you @asiajones101 and Ted for graciously offering your home for our wedding.”

In the video below, she says, “We’re probably going to have to cancel our wedding up there.” She mentions that Asia and Ted offered to let her have it at their house. Rick says, “We don’t know yet. We’re going to wait forty-eight hours. And see if they can get a handle on the fires and if the air quality improves.”

Rick Always Backs His Lady Up

Rick is always ready to back Kelly Dodd up, no matter what she says. In an article on People last year, Kelly said, “Rick is my best friend. My partner in crime, and I’m so in love. I can’t believe this happened to me. I feel like I just won the lottery.” One fan praised his enthusiasm.

She quoted him saying, “We’re getting married on 10/10 no matter what! Now that’s a man who wants what he wants and won’t let anything get in his way!”

A week ago Kelly posted that they got their marriage license. She said, “I’m so excited to marry my ride or die.” One fan said, “yay Kelly! That’s awesome! You deserve all the love & happiness with your handsome man!” People like to troll Kelly for a lot of things from her political beliefs to the age difference in her relationship. One user said, “I wonder if she ever thinks about the fact that in 10 years he will be 70 and she will only be 55.”

As if things couldn’t get any worse! Pray for Napa !! Thank you @asiajones101 and Ted for graciously offering your home for our wedding 🎩 we will overcome any adversity that comes our way!! #10/10 #cantstopwontstop

Fans Drag Kelly Dodd In The Comments For Her Concern

One fan was perplexed that Kelly Dodd would worry about her venue, because a lot of people are suffering. They posted, “Right now I see walls of flames, firefighters working thru exhaustion, people narrowly escaping with their lives. All this in triple digit heat and COVID. But no, let’s all get upset about the wedding venue.” Another said, “Oh no. Wedding plans ruined? How devastating for you! People have lost EVERYTHING!”

There were some that fans that came to her defense, because they understood. One said, “I’m sure she’s just in shock, because her wedding is in two weeks.”

Several users said people commenting would feel the same way in her shoes. Others said people were making a big deal and she was probably just using Instagram to update her guests. With the date of her wedding approaching, fans will be waiting to see where she is able to host her wedding.

‘Autopsy: The Last Hours Of Bob Crane’: Release Date, How To Watch
‘RHOBH’: Wait, Did Lisa Rinna & Kyle Richards Plan On Twinning?!
‘LPBW’ Fans Suspect Tori Roloff Is A Lazy Diva, Won’t Get Dirty With Zach
Is Jessa Duggar Finally Going To Reveal Baby No. 4’s Gender?
Amy Roloff Is Excited About Her Wedding, But Is Chris Marek?