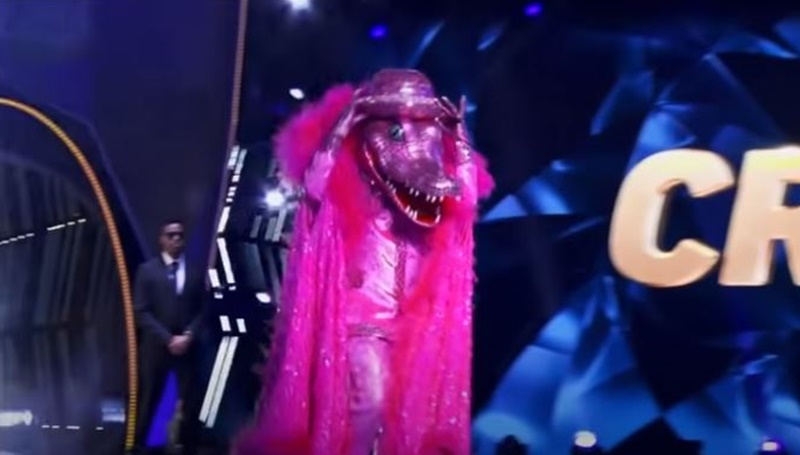 The Masked Singer on Fox brought Group B to the show this week. They include Serpent, Seahorse, Baby Alien, Gremlin, Crocodile, and Whatchamacallit. In Group A, fans already saw that the awesome Dragon hid Busta Rhymes. And, Group A’s Giraffe took it away for totally classy. Now, that eye-catching Pink Crocodile rocked up, it really gets the attention of fans. Is it possible they already know the identity?

During Group A, fans watched some rather good performances. And of course, once again fans joined in with trying to guess who hid behind the masks. Some fans think that clues make it all rather too easy this season. But, opinions vary quite widely. And, some guesses seem way out there. The crocodile comes with some interesting clues such as the tic-tac-toe board background. And, the bowler hat might be a giveaway as well.

The next clue involved the “special keys” that “reversed my game forever.” Elle floated the idea that some Instagram fans think Elton John matches the flamboyant costume. That, and the instant connection with “Crocodile Rock.” Then, Good Housekeeping pinpointed a lot of The Masked Singer fans guess at Elle King. The outlet notes, “Crocodile’s “tic-tac-whoa” clue and tic-tac-toe board could correlate to “Ex’s and Oh’s,” Elle’s hit song from 2014.”

What do fans think about the pink Crocodile on Twitter?

Who do fans on Twitter think hides under the Crocodile costume? While fans suggested Aaron Carter, others think that’s unlikely as he already featured on the show. And, a few of those people thought it might be Jaleel White. Then, a lot of fans and guessed at Jaden Smith. But, the clues might not point towards that. Then, Andy Grammer and Donnie Wahlberg got tossed out as well.

Others think that whoever The Masked Singer is, they try and sound like Jon Bon Jovi. But, while a few think about Justin Timberlake, the majority go for Aaron Carter, despite his previous appearance. Here are a few comments about that:

The crocodile is nick carter the clues matches up! I’m a bsb fan so I know that voice and his moves well 😉 #TheMaskedSinger

What do you think about all those guesses for Nick Carter? Do you agree? Almost nobody went with Elton John or Elle King on Twitter, after all. Sound off your ideas and guesses in the comments below.