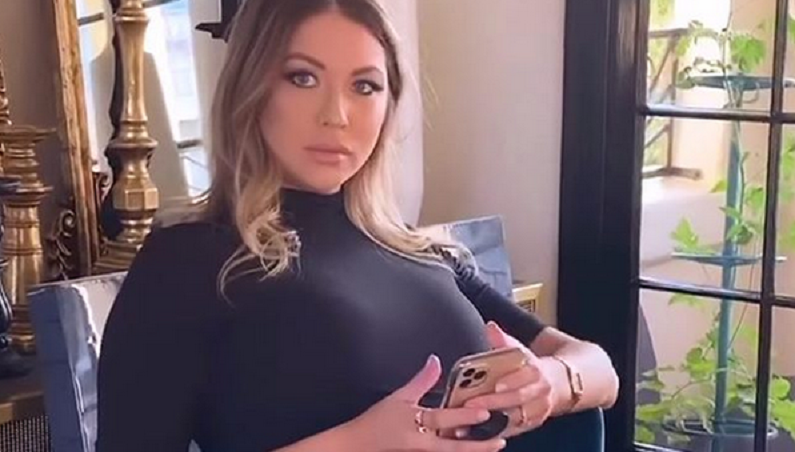 Stassi Schroeder clearly wants her baby girl to rub off on her. As fans know, she loves horror, Halloween, murder mysteries, and witchcraft. So, she wanted to make her baby’s nursery as magical as ever. She’s made a slow return to Instagram.

Earlier this week, Stassi gave her followers a glimpse at a beautiful gift from her mom Dayna. It’s the perfect addition to her baby’s nursery. She’s making sure that her daughter will become “a little witch” in the making.

Don’t worry; it won’t spook her daughter out. The gift is whimsical but age-appropriate for her baby girl. Find out what the Vanderpump Rules alum has in mind.

Stassi Schroeder jokes that her baby girl is “a little witch”

The Pump Rules veteran gave an update on her baby’s nursery. In a new video posted to her Instagram Stories, Stassi Schroeder shot a closeup of her mom she unwrapped a mobile that’s perfect for the mother and daughter duo. It’s a handmade gift that pays homage to Harry Potter.

In the clip, Dayna cut individual parts of the hanging decoration with scissors. The mobile featured white curtains and featured a copy of the book titled History of Witches. Fans can also see keys dangled from the adorable and precious decoration.

“My mom made the most baller mobile for my baby,” Stassi wrote on her Instagram Stories. “Harry Potter flying keys!”

The former reality star revealed that her mom’s sweet gift was “everything.” Stassi also said that her daughter is going to be “a little witch.” She’s going to make sure of it. Stassi also shared other decorations that was more of a “Parisian chic” theme, including a bib and a throw pillow that featured the Palace of Versailles in France.

She also shared up with a clip of the flying keys hanging a “Hedwig’s Theme,” which is the theme song to the Harry Potter film franchise.

Aside from calling her daughter “a little witch,” Stassi Schroeder admitted that her daughter will become a “monster.” She previously shared an Instagram Story that showed her newborn baby’s wardrobe. The closet was filled with dozens of clothes on hangers, shoes tucked away in shelves, and socks and accessories kept in drawers.

“I’m a monster who is creating another monster. #ootd,” Stassi jokingly captioned the clip, per Us Weekly. “This poor baby has no clue.”

Back in June, Stassi announced she is expecting her first child with fiance Beau Clark. Their baby is due in January 2021. In addition, Stassi’s former VPR co-stars Brittany Cartwright and Lala Kent are also pregnant. They’re all due the early part of next year.

Stassi previously shared that she and Lala are joining a “next-generation coven” with their daughters. Fans know that Stassi, Katie Maloney, and Kristen Doute lovingly refer to themselves as the “Witches of WeHo.” They even launched a line of wines and merchandise under the same name.