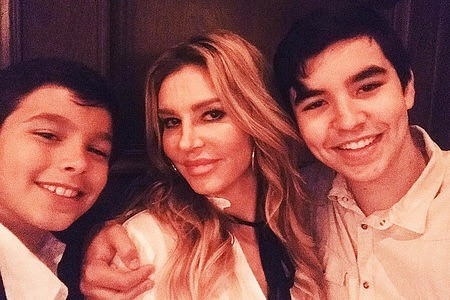 Brandi Glanville really wants her diamond back! The Real Housewives of Beverly Hills alum enlisted her two sons to petition on her behalf. And fans did not appreciate Brandi using her kids to get her job back.

Earlier this month, Brandi Glanville’s two sons appeared in a video on social media, begging Bravo to give their mom her job back. Brandi shares Mason, 17, and Jake, 13, with ex-husband Eddie Cibrian. The actor famously cheated on Brandi with country singer LeAnn Rimes. LeAnn and Eddie are still together, marrying in 2011.

During her previous seasons on RHOBH, the kids weren’t allowed to appear on the show. However, in the new video, Mason reveals that Eddie has since given his permission for the kids to appear on the Bravo show.

In the video, Jake asks Andy Cohen to “give my mom her job back” because she was “the main focus” for Season 10. Much of the latest RHOBH season revolved around Brandi’s allegations of an affair with Denise Richards. Denise denies the affair, but her co-stars mainly sided with Brandi.

Jake goes on to say that Brandi needs the money “so we can move out of this place and get her what she deserves.”

Needless to say, fans did NOT like that Brandi was using her sons to get her RHOBH job back. Many fans took to social media to slam the model for the video. But Brandi recently clapped back on Twitter.

Brandi tweeted that her sons “weren’t begging” for Bravo to rehire her. Rather, they were “simply stating their opinions” that Brandi was “used for ratings &very underpaid.” Brandi goes on to say that her kids love her, which is clear when Mason says she is the “best woman” he knows.

LBC my boys weren't begging @Andy for my job back they were simply stating their opinions.They believe I was used for ratings &very underpaid.They also think its time to do the fair &right thing in regards to their mom.THEY LOVE ME &have seen my disappointment -THAT IS IT

Us Weekly reports that her kids being available to film “intrigues” Andy Cohen. Could Brandi be headed back to RHOBH full-time?

Andy Cohen Reveals Brandi is ‘Close’ to Getting RHOBH Diamond Back

Bravo host Andy Cohen was a guest on Brandi’s Unfiltered podcast recently. The two talked about whether Bravo would consider bringing Brandi back as a full-time Housewife. As fans know, Brandi has appeared in a “Friend of” role for several seasons following her Season 5 exit.

During the discussion, Andy said that Brandi is “close to being back.” However, he pointed out that Brandi isn’t “friends with any of the women.”

While many of the RHOBH stars from Season 10 believed Brandi’s affair allegations, they still don’t like her very much. She did, however, become close friends with RHOBH alum Kim Richards.

While the ladies of RHOBH believe Brandi, fans are divided. Many fans feel that Brandi made up the affair with Denise Richards just to get back on the show. Her sons made several references to Brandi’s role in Season 10.

That gave fans the impression that Brandi lied about the affair in hopes of getting her diamond back.

Bravo has yet to announce who will be returning to The Real Housewives of Beverly Hills. Denise Richards and Teddi Mellencamp already announced that they won’t be returning for Season 11.