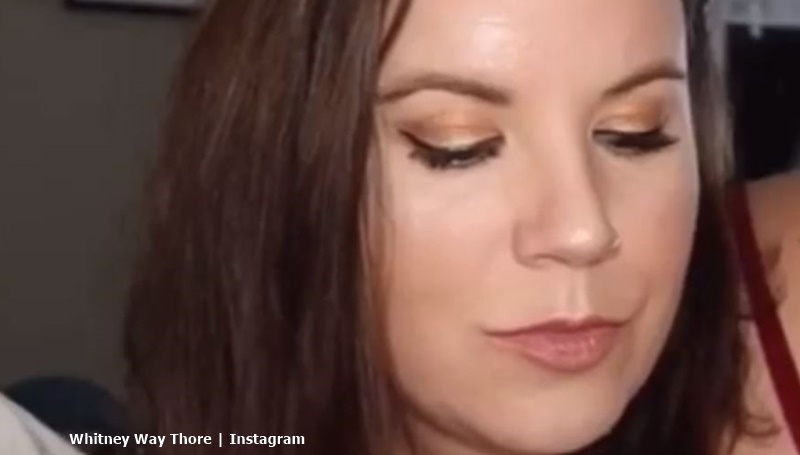 MBFFL star Witney Way Thore cried herself through a new teaser for the TLC show this week. But possibly, she moved on from there, as her sense of humour just re-emerged. She took to Instagram and gave a promo shoutout for intimate toys, (or wellness aids), in a rather hilarious clip.

We reported that in the new teaser for the upcoming season of My Big Fat Fabulous Life, Whitney cries. Her tears run down her face as she describes how Chase Severino broke the bad news. Recall, he proposed in Paris, and she sounded thrilled. But, he went with another woman. And, she ended up expecting his baby. So, he called Whitney up and told her simply must see her. But, during the quarantine, that seemed a bit inadvisable.

Ultimately, Chase blurted the bad news out on the phone. The MBFFL star talked about how she “lost everything” when that happened. However, the rest of the new season reveals how she clawed her way out of that sad state of mind. And, her friend Buddy Bell moved in and helped her out. Nevertheless, it seems that she makes an effort to find the funny side of life again. And, given her single status, possibly it’s fitting she shouted out LELO intimate products.

The LELO wellness products website describes their intimate pleasuring products as “wellness trio, LELO Beads™ Plus, LELO Smart Wand™ 2, and LELO Sona™.” Basically, they help people “drown out all the unnecessary noise and focus on your body and your mind.” Okay, that’s an interesting way of describing things like “clitoral massagers.” And, the My Big Fat Fabulous Life star made it hilarious in two ways. Firstly, in her caption, and then in the video clip.

Many of her MBFFL fans also used a play on words for a rather amusing read. After all, most people hate promos in Instagram feeds.  Whitney said, “No partner? No problem.” Then,  she talked about being “matched with her new best friend.” Then she said, if you click through, “You’ll probably be too busy to thank me, but you’re welcome!” That killed it, and many followers thought the post was funny.

Fans quip back at Whitney

In the short video clip, Whitney swiped her way through the products. And, each one brought different expressions to her face. One fan noted,”Love your facial expressions in this!” And then another fan wrote, “You’re amazing Whitney! Keep doing you!💪🏼 (pun intended😂).” But, some fans also agree she did a first-class marketing act. One person noted, “Marketing on point for this and still classy. Yessss.”

Actually, the MBFFL star made it funny, but also not too raunchy. Fans got a giggle, a laugh, and a good idea for their next intimate toy.