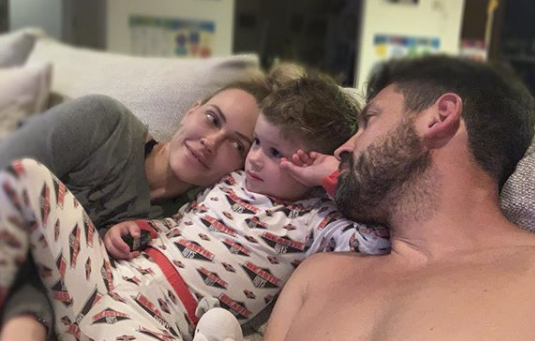 Dancing With The Stars alums Peta Murgatroyd and Maksim Chmerkovskiy have a 3-year-old son together. According to Us Weekly, their son, Shai, is interested in dance just like his parents.

“He has started dancing,” Peta said after this season’s Disney Night episode. “I don’t know if I would call it dancing dancing but he’s trying. He’s 3, so I can’t expect that much but he’s trying to do the Cha Cha right now and he did a little bit of Waltz the other day.”

She goes on to say that she and Maksim are struggling to keep little Shai entertained during the pandemic. Teaching him basic dance steps is one thing they both know how to do well.

“He’s running amok in the house right now where I’m trying to keep him occupied,” Peta said. “It’s been, like, 10 months since he’s gone to school, so we’re just trying to keep up with the new things that we can get him to do. … He’s happy and healthy, so that’s the main thing.”

Shai definitely has plenty of teachers in the family. His uncle and aunt are Val Chmerkovskiy and Jenna Johnson, two other pro dancers on Dancing With The Stars. It’s been a few years since Maksim competed, but right now Val, Jenna, and Peta are all competing for the Mirrorball Trophy this season.

And there may be more little dancers in the family very soon.

Jenna confirmed she and Val are very excited to become parents someday soon. Peta also said she would like to have more children. In fact, both women said in the past they would love to be pregnant at the same time.

“Peta and I have a deal that we’re going to get pregnant together,” Jenna confessed to Us Weekly in 2019.

They Still Have Baby Fever, But There Are Many Factors To Consider

The couples may be waiting until the danger from Coronavirus has subsided, but the idea of expanding their families is still fresh on their minds.

Additionally, they have their careers to consider. Fellow DWTS alums Witney Carson and Lindsay Arnold chose to sit out this season due to their own pregnancies. Peta and Jenna may not be ready to sit on the sidelines quite yet.

No matter what the families decide, fans are certain the new babies will be very loved and cared for. Fans already can’t wait to see how talented Shai will be in just a few more years.

Dancing With The Stars returns on Monday night for week 4. Don’t forget to tune in! Who’s your favorite pro this year? Are you cheering for anyone in this super talented family? Let us know in the comments.