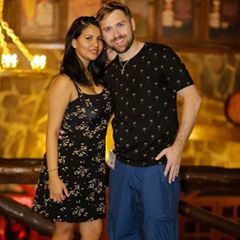 90 Day Fiance stars Paul Staehle and Karine Martins dropped the restraining orders against each other. Could we be witnessing a marriage on the mend?

Paul made claimes in July that Karine, and their small son, Pierre, were missing after a heated argument. Paul later claimed that she filed a “full restraining order” against him. “I’m not allowed to be around her or my son, within 500 feet of them at all,” he said on his Instagram Story at the time. According to a report om US Magazine.

Karine alleged in her written statement that Paul had raped her. She also said that he withheld her Green Card so she could not leave the country. “I am terrified he will hurt me or hurt my son. I ran away from him and I am even afraid to go back to Brazil now because he can go to Brazil and hurt us,” she wrote. Paul retaliated by filing for his own protective order in July.  Paul explained, “I found similar glass shards from an item she broke.” He then went on to say that Karine “assaulted” him. A judge has ordered her to cease communication with her husband and stay 500 feet away from him.

The reality stars dismissed three emergency protective orders on September 16, according to court documents obtained by Us Weekly. There will be no need for the two to appear in court in the winter months for a hearing. The papers state that the removal of the orders came at the request of the petitioners.

Paul has made a lot of accusations against Karine. He even said that Karine is now pregnant with the estranged couple’s second child. “I have had to double up on my therapy to cope with this madness,” he commented on social media. “Her motion against me with false allegations is for a 3-year restraining order against me and both my children. Alimony and child support. But I cannot see her or my children at all.” “I have to cope with the fact I probably will never see my wife and son again,” he wrote via Instagram. “Or see the birth or ever see my unborn child, I have lost my sons.”

Karine has been silent since the dramatic separation. Karine only came out to let people know that she and Pierre were safe. Fans were hoping to hear from Karine in the 90 Day Fiance: Tell All. The couple both declined, presumably due to their many legal issues.