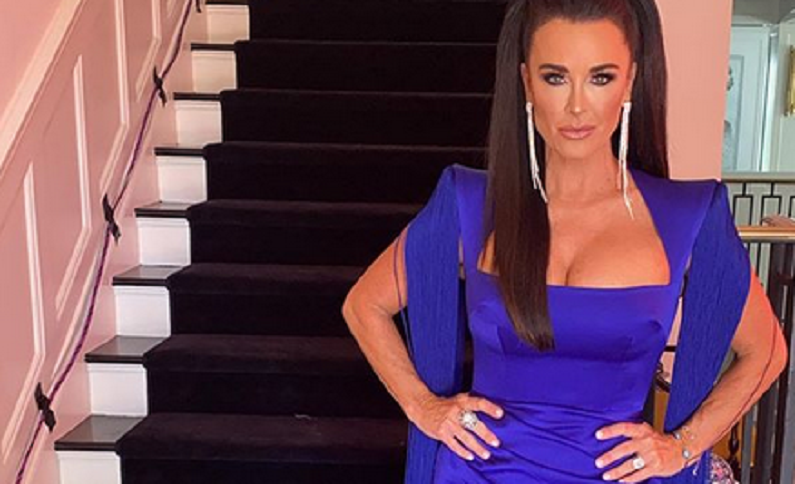 Last week, Kyle Richards gave an update on her mom’s stolen ring. She found it on Diane Keaton’s Instagram post. The actress shared the hands of a psychic she came across on the promenade in Santa Monica. Richards hunted down the alleged ring thief but gave up due to her busy schedule.

Now, the lady is coming forward and she’s mad. The fortune teller revealed her identity on Monday’s episode of Inside Edition. She doesn’t like being accused of stealing jewelry. The psychic thinks that Richards should apologize to her — not the other way around.

The woman who allegedly stole a ring from the RHOBH star showed her face on CBS’ Inside Edition. Diane French is the woman behind Diane Keaton’s Instagram post. She even showed her long black sharp nails in the interview. She made it clear that she’s not happy with Kyle Richards or Diane Keaton.

When Richards saw the photo of French’s hands-on Keaton’s Instagram post, she thought she had the ring stolen from her home during a 2018 burglary. Keaton identified French as the woman in Santa Monica. Richards issued a private investigator and then decided to have her own investigation.

Then, a TikTok user identified French as her grandmother. Understandably, she tried to clear French’s name. The girl claimed that her grandmother owned the ring for decades while offering photographic evidence. French told Inside Edition that she wants an apology from both Richards and Keaton.

“I don’t deserve this,” French said. “My twin sister called and said, ‘Diana, you’re on Google.’ My mother was killed 40 years ago and my dad gave me her band.”

French says she has appraisal papers from 1980 that shows the ring’s value at $2,500. Additionally, she has family photos that show her wearing the ring for decades. French also revealed that she’s had her long nails for several years.

Is she really a psychic?

It’s unclear why Kyle Richards thinks French is a psychic. French doesn’t recall the time when Keaton took the photo. But she does remember when the actress was her customer. But it’s not what you think. Keaton wasn’t asking French to discover her destiny.

“That picture of my hands was taken on the counter of the pharmacy,” she revealed.

She is now a retired pharmacy clerk who lives in Los Angeles. But she denies the allegations that she is a fortune teller. Unfortunately, French has gone viral for all the wrong reasons. French wanted to show herself to prove that she didn’t steal Richards’ ring.

Richards has gone public with the search for her mom’s ring for years. But she never accused French of theft. The Bravo star assumed that French purchased the ring from a pawn shop. She even offered to purchase it back from the woman.

But French claims that she’s been ridiculed for a crime she did not commit. She also doesn’t like the rumors swirling about her alleged career. So far, Richards hasn’t responded or issued an apology.