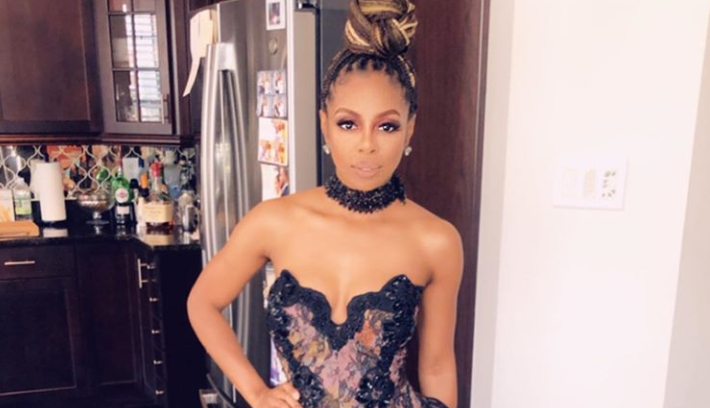 Candiace Dillard went on The Wendy Williams Show and revealed she’s still not okay. She referred to a fight she got into with her Real Housewives of Potomac co-star. A verbal argument between Candiace and Monique Samuels turned physical once they’d had enough.

Monique grabbed her by the hair and pulled across the table. Dillard told Wendy she didn’t know why Monique wanted to fight.

Wendy helpfully reminded her she allegedly accused Monique of, “having an affair behind her husband’s back.” Dillard said she did not. She said, “she never had a conversation with me about these rumors that she heard. I was never a part of a spin, a spreading, a plot. That was never anything that I was a part of.”

She said the accusation only came out once filming had wrapped. Dillard said, “Monique looked for any reason to justify physically attacking another Black woman on national television.”

Candiace Dillard wanted it made clear, she does not support throwing down as a means of solving things. She said, “this is never somewhere that I saw myself being at any time. I’m not a fighter. I don’t fight. It’s not what I do and having gone through this and having dealt with literally, the trauma of it.” She went on to say she doesn’t want this to be representative of her or Black women, especially in 2020.

Dillard said according to E Online, “I’m embarrassed. We are entrepreneurs, we are wives, we are mothers, we are enterprising women, we don’t do things like this. The fact that this took place, it’s embarrassing for me.”

🎬Last night was one of the longest on set for me. I’m tired. My body is tired. But whew, am I grateful. Can’t wait to deliver a film that gives you all levels of humor, tragedy, love and Christmas magic! 😜 @octetproductions and @bet are on a roll with this one!🎬🎥 • • #christmasmoviemagic #andaction #emotion #setlife #RHOP #BravoTV #shecamefromJesus #sleepingbeautyiswoke #readingisfundamental🌸 #candiacedillard #candiacedillardbassett #primahaircollection ##vote #yourvotecounts #electionday2020 #november3rd

The Wives And Fans Have Been Discussing It On Twitter

On her Twitter, Candiace Dillard responded to Ashley Darby’s tweet about the episode. Darby said, “this was a rough episode, truly.” She said that nobody had complete innocence. Darby didn’t like the way it escalated.

She said everyone makes mistakes and it’s all how you move forward. Candiace Dillard responded, “it IS about how we move forward, isn’t it? Hm.” One fan said, “Ashley needs to focus on her entanglement and stay out of this one since she didn’t even see it.”

Monique tweeted, “If I knew then (triggers) what I know now… none of this would have escalated this way.” One fan said, “When you watch it, it’s obvious you were provoked & she was instigating you completely. I mean, not condoning the violence but you snapped.”

There are two sides to every story and fans have their opinions. Some defended Candiace and some defended Monique. Others think they were both in the wrong and should have taken a beat. The Real Housewives of Potomac airs Sundays and fans can’t wait to see the aftermath.