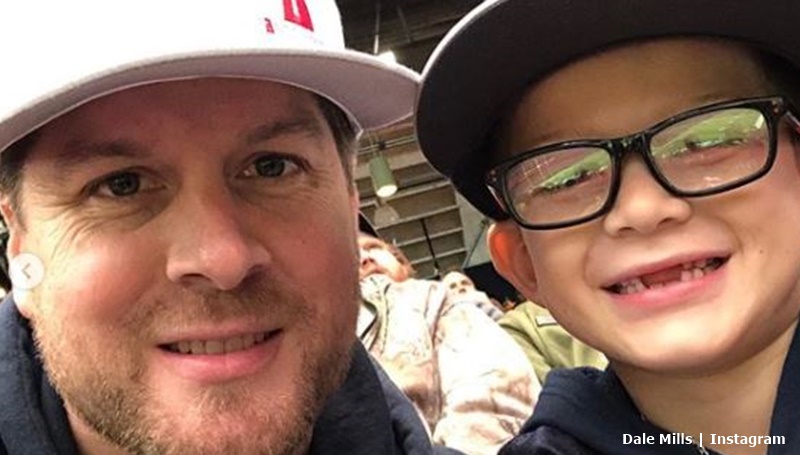 OutDaughtered fans sometimes see Bronson with the Busby kids on the TLC show. He’s the son of Dale and Danielle’s sister Kiki. Recently, he and his big sister McKenzie went back to school. And in November, he celebrates his eighth birthday! Now, Uncle Dale Mills and his son celebrated National Son’s Day together.

On Sunday, Dale took to his Instagram and shared a number of photos of his son Bronson. Some of them represented throwback pics from his days as a young toddler. In his caption, Dale said, “Proud of my buddy BronBron!” He added, “I love you son.” And, from his hashtags, it looks like they played some golf together. He also used #nationalsonsday and #carryingonthegoodhairgene.

One of the photos revealed Dale with Bronson both wearing their cowboy hats. And, fans noticed his cute missing front teeth. Then, another pic revealed Bronson as a chubby little toddler.

And OutDaughtered fans loved another one where he looked very small. It showed him as a tiny tot with one tear on his cheek. But, the main photo revealed that Uncle Dale’s not joking when it comes to good hair genes.

Kiki responds to the photos of her son and husband

Bronson’s mum popped up in comments of the post. She said that Bronson’s “a Mommas Boy all the way.” Then, the TLC guest star said that she loves her boy. Actually, many fans agreed that her son looks very much like her. And that thick blonde hair looks really wonderful. In fact, some fans envy Bronson’s hair. Of course, lots of people wished Dale and Bronson a happy National Son’s Day.

One OutDaughtered fan commented, “LOL, good hair gene!!🤣 Ya’ll really do have good hair tho!” And other fans wished for the genes. Then, a follower wrote, “That kid is freaking adorable! I know he must be a bright light in your life 💕.” Some fans wrote about Hazel, the red-haired Busby quint who adores both Uncle Dale and her cousin. A comment read, “He looks just like your wife! Your daughter looks just like you imho. I love how funny you are and your special thing with Hazel!”

Some followers thought that Bronson shared the same cheeky grin as Riley Busby. If you don’t know, Riley’s the clever quint who started kindergarten ahead of the other quints. She’s bright, very self-confident, and yes, her engaging grin attracts people. In fact, her dad, Adam Busby calls her the “boss.” And, when filming, he often reveals her talking confidently to the cameras.

What did you think of the photos that Dale Mills shared of Bronson on National Father’s Day? Do you agree that he’s very blessed with hair genes? Do you hope to see more of him on the OutDaughtered show? Sound off in the comments below.