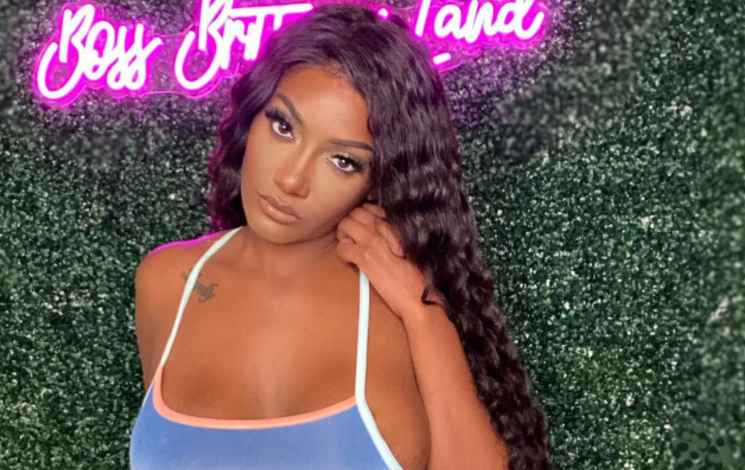 90 Day Fiance: The Other Way stars Brittany Banks, 26, and Yazan, 24, have experienced plenty of cultural clashes on the TLC reality show. Brittany is an Instagram influencer and model from Palm Springs, while Yazan is a strict Muslim living in Jordan. Yazan’s family was already shocked over Banks’ images on Instagram. If his family has seen one of her recent Instagram Live posts, they are probably apoplectic by now! A follower spotted the Instagram Live and posted it to Twitter, where she appears to be using drugs.

Among the many problems between Brittany and Yazan included the fact Banks is still married. On top of this, her scantily clad images on social media totally upset his family. Quite honestly, the relationship has no hope to surviving the cultural differences between the pair. Due to this, Yazan is still in Amman, Jordan, while Brittany is back home in Florida.

Me and that n*gga geeked we be tweaking together 😈😋 @nikkiwearshop

Brittany continues to post sexy images on Instagram, sharing with her fans and being her usual “The boss Brittany” self. However, it looks like Banks may have taken things a bit too far this time.

Is Brittany using drugs in her IG Live?

Brittany made an Instagram Live, where she was complaining about a fast-food order she had made. Basically, Banks was upset she had to go down to collect the food. According to her, if she has to get dressed to go downstairs, she might as well have collected the food from the restaurant.

Many fans sympathized with her problems with the fast-food delivery, but others captured the footage. It appears to clearly show Brittany using drugs or doing something similar in a sidebar while filming the footage. Now her fans are attacking Brittany for breaking the rules on Instagram, while openly using drugs. This didn’t upset Brittany too much, who instantly clapped back at those fans.

Aspiring rapper has a wide following

Before appearing on 90 Day Fiance, Brittany already had Instagram stardom as an aspiring rapper, with more than 300K followers. According to Screen Rant, she also reportedly has two OnlyFans accounts. This meant her Instagram Live got wide viewership, leading to many screengrabs doing the social media rounds. This includes the one above, shared by 90 Day Fiance blogger, John Yates, who shared it on Twitter.

Brittany goes out of frame twice in the video footage, coming back, sniffing and wiping her nose. In the comments, fans pointed out she could have been “doing a line of cocaine.” Some fans think Banks is doing this to get attention and get people talking. Other fans, didn’t believe she was doing drugs live on Instagram.

However, on Monday night, the TLC reality star did another Instagram Live and once again the comments flowed. One asked, “Is she really a coke head?” Others contacted TLC about the incident and Brittany’s future on 90 Day Fiance. However, Brittany clapped back, saying she “didn’t do it.” She noted that fans didn’t see her doing drugs, they just heard her sniff. Brittany added that she has “allergies” and mentioned that a dog sheds everywhere. Banks went on to say that TLC isn’t going to fire her and that she had talked to them that day.

As to her standing with TLC, the status of Brittany and Yazan’s relationship can only be imagined until the show comes back in October. However, as Larissa Lima has recently been fired over her CamSoda account, maybe Brittany should worry about her future with 90 Day Fiance?

90 Day Fiance: The Other Way returns to TLC after a midseason break this October.