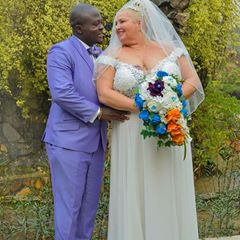 90 Day Fiance veterans, Angela Deem and Micheal Ilesanmihas, seem to have black clouds over their rocky relationship. The couple that seems to argue in every episode, finally, tied the knot. The excitement was short lives when angela got the news that her mother was in the ICU. Her mother passed just weeks days later!

Angela Deem got the devastating news that her mother was hospitalized in the United States just hours after marrying Michael in Nigeria. Angela’s mother gave her a blessing to go marry Michael. She insisted that she would be okay under the care of her granddaughter until Angela returned. Angela’s mother hung on for as long as she could.

Angela and Michael have also argued about Angela’s fertility. Starting a family is important to both of them, and it was revealed that Angela could not have any more children. Micheal has no children but Angela has two daughters Skyla and Scottie who both gave Angela grandkids. Her daughters and grandchildren were also unable to travel to Nigeria for her wedding.

On the recent 90 Day Fiance Tell-All show, Angela and Michael talked about the many challenges in the couple’s relationship.  During the recent virtual meeting, Angela is back in Georgia, while Michael remains in his hometown of Lagos, Nigeria. Angela spoke about how difficult it is to be away from Michael, especially when mourning her mother. “It’s really hard, like sometimes, you know, you just need your husband,” she said on the show, “COVID messed that up. I can’t just fly over there.”

The pandemic has also lengthened the time it takes to get a spousal visa request approved. Angela and Michael confirmed that they had filed Michael’s paperwork for the visa, but that it will take longer than the usual six to eight months to be approved. “After the pandemic, we still have to wait probably a year for him to get the spousal visa,” Angela revealed. According to Screen Rant.

Fans have wondered if the couple can keep their relationship strong, long-distance for very long? Fans speculate that Angela Deem seems to believe that the two can make it through the pandemic. Michael said that they have been able to resolve fights quicker by talking on the phone, but that they do still fight.