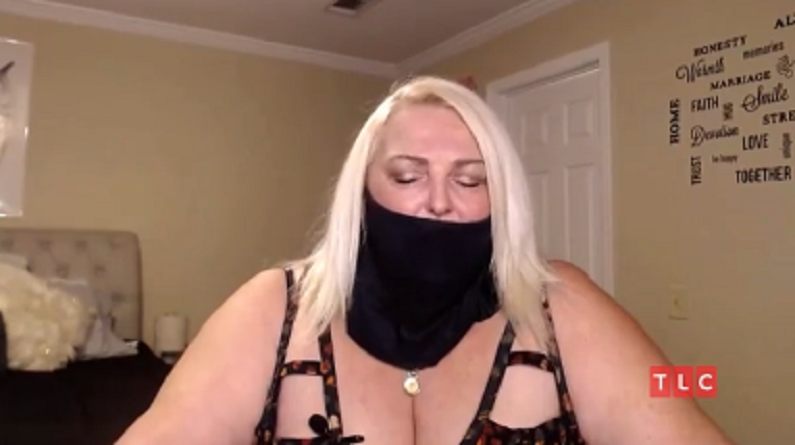 90 Day Fiance fans were confused over the preview for Sunday night’s Tell All. In the footage, Angela Deem wore a black face mask. However, the three-part special wasn’t filmed in New York City. It’s a virtual telecast that took place via Zoom. But Angela still wore a face mask, which is a stark reminder of current events.

Fans have been looking forward to this event. They will finally get to watch the three-night Tell All portion of the show. Some would say the Tell All is better than the entire season. It’s sure to be just as explosive as this season was.

In the preview for the Tell All, viewers wondered why Angela wore a face mask inside her own home. One 90 Day Fiance fan shared a screenshot of Angela on Reddit. In the photo, Angela sits by her computer at home with a black face covering over her mouth.

Fans wanted to know why she’s wearing it inside her own house. Others accused her of wearing it wrong. As you can see, her nose isn’t covered.

“What is Angela wearing?” the fan asked. “A neck gaiter,” another fan responded. “But I don’t get why she is wearing it like that let alone in her house.”

However, fans wanted to know why she’s protecting herself inside her own home. Is one of her family members sick? Is she sick? Does she have to protect her family because of her profession?

Some lucky 90 Day Fiance fans already watched the first few minutes of the Tell All episode. And now they finally know why Angela covered her face. It has nothing to do with coronavirus. In fact, she’s using it to protect an abscess.

Host Shaun Robinson asks Angela about the face covering. She addressed it during the first moments of the episode.

“Now Angela, I’ve got to ask you, about the mask,” Shaun said. “Are you doing, what, some social distancing, and is that for the pandemic?”

Angela mumbles that she got some “dental work” done. She can’t allow air to get to it because of the abscess she has.

“No, I am doing my social distancing, but I have some dental work getting ready to go on, and I’ve got an abscess,” Angela explained. “Yeah, I had to keep it covered so the air won’t get in and make it worse. It’s pretty bad.”

How is Angela doing since her mother’s passing?

In the previous episode of 90 Day Fiance: Happily Ever After, Angela had to rush back home to her mother’s side. She received a concerning phone call from her daughter, Skyla, who said that Angela’s mother was unresponsive. She was rushed to the intensive care unit of the hospital.

Angela was understandably concerned. She booked a flight home early to be with her one last time. Just 10 days after arriving back home to Georgia, Angela’s mother passes away. During the Tell All, Shaun offers her condolences to Angela.

What else will happen during the special? Tune in to the 90 Day Fiance: Happily Ever After part-one Tell All episode on Sunday night, September 27 at 8 p.m. ET on TLC.