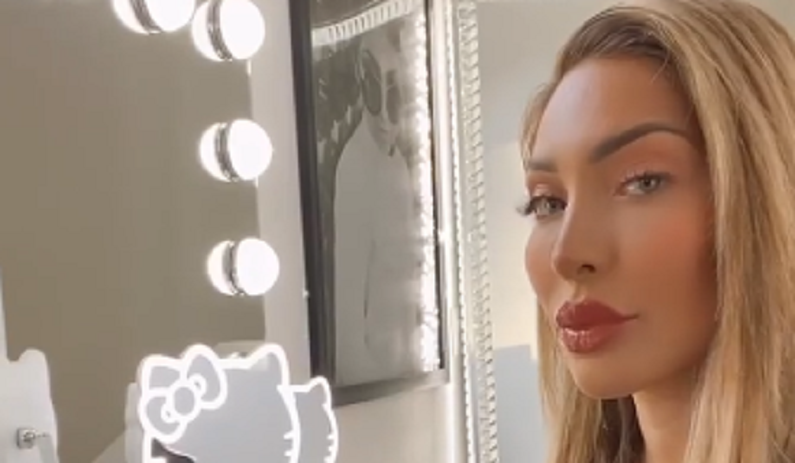 Farrah Abraham is not over her Teen Mom firing. The reality star slammed the cast of the reality series and MTV producers on social media. As fans know, Farrah always speaks out on what she believes in. She stands up for herself when no one else does.

On Thursday, September 24, Farrah wrote a passionate Instagram post. She fired back amid the allegations surrounding Ellen DeGeneres. Farrah shared a clip of Fox News host Tucker Carlson who reported that Ellen felt “betrayed” by those allegations and “wants out of the show.” Inspired by Ellen’s story, Farrah decided to share her thoughts on her MTV firing.

Farrah Abraham is still hung up on her firing

The Teen Mom OG star claimed that MTV harbored a toxic work environment as well. She included a video of MTV producer Morgan J. Freeman accusing Farrah of being the worst Teen Mom. He claimed that she was difficult to work with. She claimed that she had to choose between filming the show or working in the adult entertainment industry.

MTV fired Farrah after she starred in the Backdoor Teen Mom adult video with James Deen.

“Ladies, [your] becoming of age journey does not ever mean you have to succumb to a mans [sic] mediocrity like the other weak teen moms have in every way,” she wrote in the caption.

Also, Farrah didn’t like the way Teen Mom portrayed her on the show. She didn’t like having to choose between reality TV and the adult industry. However, it’s commonplace, even if it’s not fair. As TV Shows Ace reported, TLC fired 90 Day Fiance star Larissa Lima for appearing on CamSoda. And Love Island producers removed Noah Purvis over his adult entertainment career.

1. MORGAN CALLED ME AFTER THIS & gave me an ultimatum Teen mom or Adult Entertainment & I chose “FARRAH ABRAHAM” ladies becoming of age journey does not ever mean you have to succumb to a mans mediocrity like the other weak teen moms have in every way. 2. I was told by Ben Hurvitz at Viacom to have fun on this show after they wrongly fired my 8 year female story producer for no reason yet other moms have their producers as god moms of their kids & the rest of the female executives were gone who supported female perspectives. Odd Morgan’s choice of words and lying to my face and the world about who I am, the hardest worker, a woman whose been kicked when she’s down, who shows kindness and giving but I’m not giving my life to false story and failed justice and against the reason I joined this show. It’s weird how men try to make a widowed famous teen mom out to be a porn star yet their the ones who watch porn and I didn’t switch careers nor is a career sexually transmitted. Clearly poor type casting example again. 3. The rest of the women on crew infected with the evil neuroses created fake scenes ,drama, disrespected my parenting, disregarded my boundaries from counseling and created fights in front of my daughter. This mom chooses her child over everything. 4. On top of being fired on a day I wasn’t scheduled to work and production not finishing out their own contract I boiled this down to white male privilege, careers are not sexually transmitted, I do not have to conform to gender norms, and like the fellow woman who wish to have my fame, wealth, life and strength and instead live in a failed reality of “family,friends, on a crew” entertainment business is strictly business, as always talent on my past shows have learned from me if you want a better contract, legal protection, professional atmosphere then business is business. Not a network family – it’s business. 5. It’s pathetic Teen Mom never grew with their lead talent (myself) My brand shows beyond woman not having to conform to gender norms, not allowing reverse physiology from privileged men, that I’m blessed to be the 1 woman out them all who wanted better for all of the network

“…I am the hardest worker, a woman [who has] been kicked when she’s down, who shows kindness and [gives,] but I’m not giving my life to [a] false story… [which is] against the reason I joined this show,” Farrah argued in her post.

Additionally, Farrah claims the drama was scripted. She argued that she didn’t sign up for a “psychodrama,” rather a documentary on her life. The influencer also accused MTV of creating a “false sense” of her character. She claims it wasn’t a healthy environment for her and her daughter.

“The rest of the women on crew infected with the evil neuroses created fake scenes, drama, disrespected my parenting, disregarded my boundaries from counseling and created fights in front of my daughter,” Farrah continued. “This mom chooses her child over everything.”

Surreal day seeing my mom on the #MTV Wall on way to my own meeting – now getting to work hard on my next chapter in my tv career I’m working hard thank you mom, my agents and the creative development 🙏🏼team at #viacomcbs #fullcircle #grateful #thankyou ❤️❤️❤️

In the lengthy post, the controversial celeb referred to herself as the “lead” of the series. Then, Farrah added that it’s “deplorable” how much the show changed. She also tagged Creative Artists Agency and ViacomCBS in her post. Farrah’s latest post is interesting when she previously hinted her daughter, Sophia Abraham, struck a deal with MTV back earlier this year.