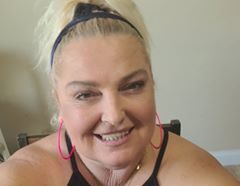 90 Day Fiance Angela Deem has had her share of drama on the popular TLC show. It now appears that this isn’t the first nail-biting show she has been a part of!

Angela Deem has aired her dirty laundry on the reality tv show 90 Day Fiance and has kept viewers biting their nails. It seems that the 55-year-old has been apart of another once-popular drama, The Maury Show. This reality show didn’t feature Angela and Micheal this time. This was all about her daughter trying to prove that her boyfriend wasn’t her baby’s daddy, according to Screen Rant.

A little back story on Angela Deem

Angela Deem first appeared on 90 Day Fiance with her love, Micheal Ilesanmi. Angela is a Georgia native while Micheal is from a small town in Nigeria. The pair met online and after a while of their internet romance, Angela traveled down to Nigeria. Angela and Micheal went through many ups and downs that are usually always overdramatized by Angela Deem. The couple is now happily married and enjoying their long-distance marriage. It seems that Angela is attracted to drama. From Angela’s spicy marriage to Micheals to her daughter, questioning who her babies daddy could be.

In 2005, Angela Deem was apart of the once-popular tv show The Maury Show. It seems that her daughter, Scottie Deem, was questioning who her baby’s father really was. Angela insisted that her daughter’s boyfriend, Terry couldn’t be the father of the couple’s child Anna Sky. Angela’s daughter, Scottie, says Terry is the father, but her mother claims another man, named Chris, is the father. Angela claimed she knew about Scottie having a one-night stand with Chris, just two weeks before she got with Terry. Scottie responds by calling her mother “delusional”. The DNA test declared that Terry is Anna Sky’s father and Angela was wrong.

Angela didn’t appear on the show just once, but twice! This time Angela once again questioned the paternity of Scottie’s second baby, Ariah, and accused her daughter of having a baby with a man who wasn’t her boyfriend.  Angela stated, “she caught her daughter with another man, so she knows this is not Terry’s baby.”  Maury was quick to remind Angela that she was proved wrong once before, but she keeps insisting that Scottie slept with the man in question at her house.  Maury showed the DNA results, Angela was proven wrong again. Angeal lovely hugged her daughter, clearly in defeat.

Time to make up!

Angela’s daughter, Scottie now appears to have made up with her mom and Scottie has posted that she is “thankful every day” that the reality show star is her mom as per her social media updates on Instagram.

‘DWTS’: Nev Schulman Pulls Off The First Perfect Score Of The Season
Kourtney Kardashian’s Post Has Fans Hoping For A Romantic Reunion
Danielle Busby’s ‘Sisters’ Post Confuses Fans, Who Is The Mystery Girl?
‘OutDaughtered’ Quints Terrified Of Easter Bunny – How Do They Cope On Halloween?
Sadie Robertson Calls COVID-19 A ‘Dark Sickness’