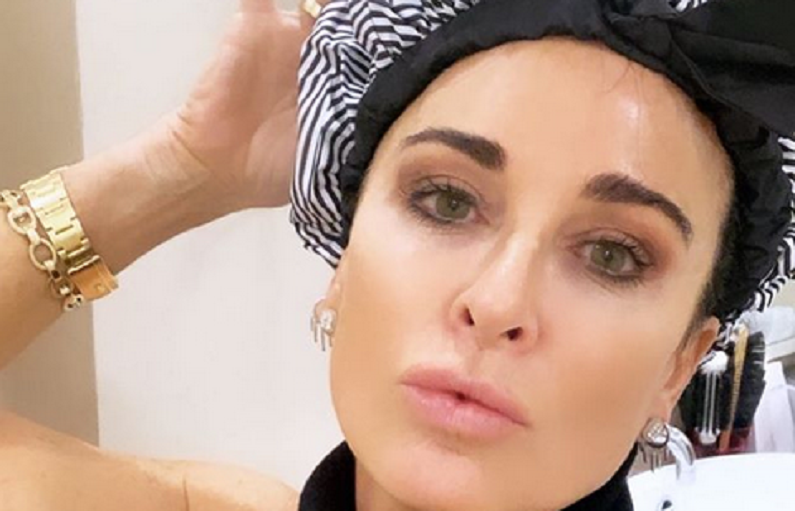 Kyle Richards revealed a wild story about her mom’s stolen ring. And it all has to do with actress Diane Keaton. The Real Housewives of Beverly Hills star gave an update on her missing jewelry. On Wednesday night’s “Secrets Revealed” special, the Bravo star recalled the bizarre story.

Unfortunately, it wasn’t shown during Season 10 of the reality series. Most of the drama stemmed around Denise Richards and Brandi Glanville. Meanwhile, Kyle often found herself at odds with Dorit Kemsley over her glam photoshoots. But there was no word on the home burglary that took place a few years ago.

During the special, Kyle Richards revealed where she found that ring. She was scrolling through Instagram and came upon a photo posted by Diane Keaton. The picture featured a woman who had long black fingernails and several rings on her fingers. Kyle noticed what appeared to be her mom’s missing ring.

She reached out to Diane who revealed that she took a picture of a fortune teller’s hands because of how they looked. She took the photo while on a walk on the promenade in Santa Monica. Kyle hired a private investigator to help locate the psychic. But after several failed attempts, Kyle took matters into her own hands with her friend Teddi Mellencamp.

“We thought we were hot on the trail but then we realized we were just in circles,” Teddi said.

Unfortunately, Kyle couldn’t continue the mystery due to her busy schedule. She was currently filming the new horror movie Halloween Hills in North Carolina. The Bravo personality would like to continue with her search for the psychic. Kyle even offered to buy the ring back from the woman if she ever runs into her.

Shortly after the episode, RHOBH fans took to social media to react to the story. Some of them cracked a joke about Kyle’s “old lady” hands. Others thought this storyline was better than the one about Denise and Brandi. Fans have been sick of the fighting that takes place every season.

“Looks like Kyle’s found the ring thief,” one fan tweeted.

“Why was this whole storyline about [Kyle Richards] ring and the psychic not included on the show? It’s so much more interesting than the bickering,” another viewer pondered.

*Objects on Zoom may be different than they appear. #CommentsByCelebs #RHOBH

Kyle further addressed the incident on Instagram. On Thursday, September 24, she said that she’s received “a lot of questions” about the item. She took to her Instagram Stories to share a photo of the ring. She even shared a side-by-side comparison of her mom’s ring and Diane Keaton’s Instagram post.

Some fans would like to help Kyle Richards solve this crime. Most of them have been putting their thinking caps to good use. And now it’s been reported that a young woman on TikTok named Maddie Brown has claimed to be the granddaughter of the fortune teller.

“Hey, Kyle Richards. I see this post on Diane Keaton’s story about your mom’s stolen rings,” she wrote. “I just want to clear things up. This ring right there, that’s my grandma’s ring. She has been working in a pharmacy for over 50 years, has had those rings for decades.”

Maddie also provided photographic proof of her grandmother wearing those same rings in past occasions. Kyle has not responded to Maddie’s comments. It’s likely that there’s many older women with the same ring. Kyle just hopes to clear the air with the woman if they ever meet.