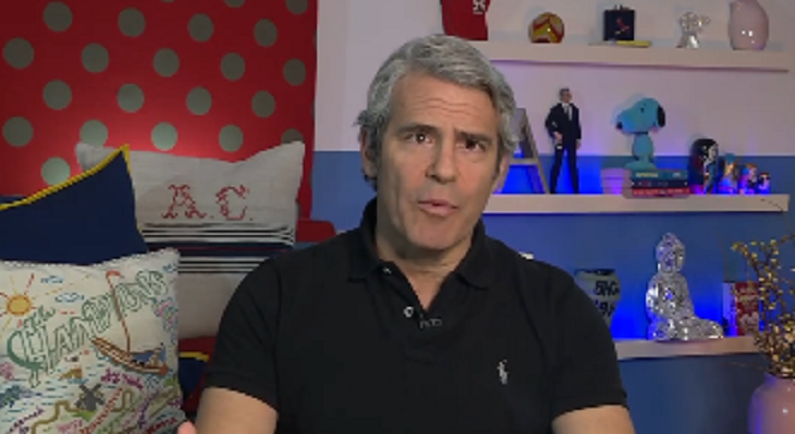 Andy Cohen addressed Kelly Dodd’s controversial coronavirus comments. As TV Shows Ace has been reporting, RHOC fans slammed Kelly for her thoughts on the COVID-19 outbreak. They argue that she doesn’t deserve to be on the show. Her comments were especially a concern amid the ongoing Bravo firings.

So far, Bravo has only fired four castmates from Vanderpump Rules and one from Below Deck Mediterranean for their racist comments. The network hasn’t fired anyone else since. Fans weren’t happy when they saw Kelly in the trailer for the new season of The Real Housewives of Orange County.

Now, Andy is addressing everything, including those comments.

2020 has been bad enough. All around the world, people had to quarantine in their homes to prevent the spread of the COVID-19 virus. Unfortunately, Kelly Dodd made things worse when she said the virus is “God’s way of thinning out the heard.” She also recently declared that the pandemic is over.

In the trailer for The Real Housewives of Orange County Season 15, Kelly says as she Facetimes someone, “There’s no toilet paper.” Most of the season is said to address the pandemic. But this isn’t good news for fans who watch the show for escapism. Plus, fans aren’t looking forward to seeing what else Kelly has to say about it.

Andy Cohen didn’t address all of Kelly’s comments. However, he did talk about her Instagram Story during an episode of Radio Andy. She recently shared an Instagram Story with her plastic surgeon saying that masks will not protect you from the coronavirus unless they’re N-95 masks. But some could argue that wearing a mask is better than wearing no mask at all.

“I think that her posts show how woefully uninformed we all are and what a horrible job that this administration has done to inform us about this disease,” Andy said. “We are now eight months into this and we are chasing our tails and they are giving us completely contradictory information.”

According to Andy, public figures like Kelly are not someone people should go to for advice about the pandemic. He also told followers not to seek advice from their plastic surgeon. Instead, everyone should do their own research and speak to their doctor. This is important, especially when misinformation is spreading, especially in these concerning times.

How do the RHOC fans feel?

Most fans don’t like Kelly Dodd. There have been calls to have her removed from the show. Most of the fans agreed with Andy’s interview. But they do believe that the contradictory information is a problem.

However, some fans disagreed with Andy for political reasons. Others argued that Bravo is the problem because they keep giving Kelly a platform. And then there are some who think Andy and Bravo shouldn’t get into politics. Somehow, the pandemic has become political fodder, especially amid the 2020 election.

What are your thoughts on what Andy said about Kelly’s comments on the COVID-19 outbreak? Sound off below in the comments section.

Lifetime’s Thriller ‘Burning Little Lies’ Is Not A Fairy Tale
’90 Day Fiance: The Other Way’ Spoilers: Did Ellie & Victor Break Up?!
‘Bold And The Beautiful’ WOW! Finn’s Bio Mom Is A Forrester?
Wait, What?! Matt James & Rachael Kirkconnell Left ‘After The Final Rose’ Together?!
Derek Hough Dishes On His Relationship With Hayley Erbert