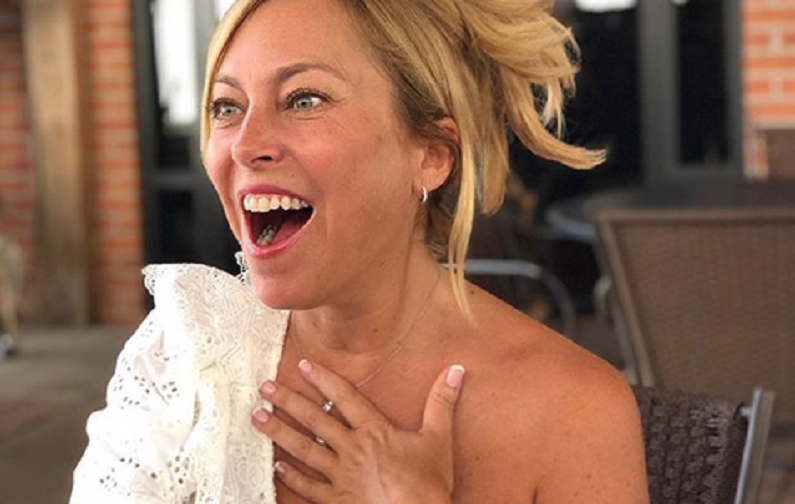 Sutton Stracke broke her silence on Teddi Mellencamp’s firing. As TV Shows Ace previously reported, most of Teddi’s RHOBH co-stars kept quiet except for Kyle Richards. Earlier this week, Teddi confirmed that she’s leaving The Real Housewives of Beverly Hills after three seasons. And her newbie cast member had something to say.

The Southern Belle sat down for an exclusive interview with Derek Zagami on his podcast “RealiTea With Derek Z.” Of course, Sutton discussed all things Housewives with Derek. She also opened up about Teddi’s shocking firing. In the clip posted online, Sutton wore a light pink tee shirt with her signature blonde locks flowing freely.

The newbie joined The Real Housewives of Beverly Hills during Season 10. At the beginning of the season, she exclaimed she knew Teddi Mellencamp would be “boring.” Sutton Stracke revealed how she felt about Teddi’s firing. She said that her RHOBH co-stars were all upset with Bravo’s decision.

“Well, I think we were all sad,” Sutton said. She then added that “it’s been really fun getting to know Teddi.” Sutton reached out to the accountability coach the moment she heard the news. But she has a good feeling that the next chapter in Teddi’s life will be even better.

“I think that we just kind of let her have some time,” Sutton said.”I know she’s so busy with that little sweet muffin, Dove. I know Teddi is a fighter, literally.” She went on to say, “I boxed her. So I know that she is a fighter and she’s going to come on top. She’s going to do something great.”

Fun doing a spot on @ktla5news this morning! Thanks Sam!

Sutton wished her well during the interview. Teddi announced on Instagram that Bravo did not renew her RHOBH contract for the next season. This comes amid the allegations surrounding her All In By Teddi programs. She was accused of promoting a program that “starves” clients and sends “abusive” text messages if they fall off track with their diet and exercise.

Where do Sutton and Teddi stand?

Sutton Stracke revealed her first impression of Teddi Mellencamp during Kyle Richards’ dinner party earlier this season of The Real Housewives of Beverly Hills. She admitted that she thought Teddi was “gonna be a little boring.” Teddi talked about that moment during Part 1 of the RHOBH Season 10 reunion.

“Sutton hadn’t taken the chance to get to know me or anything like that,” she said. “I think she decided the second she saw me in my ‘cute, little black romper’ that she had an issue.”

Teddi referred to the black romper that Sutton called “cute” during her confessional after they first met during a trip to New York Fashion Week. But it wasn’t being called “boring” that hurt her. “It was the, ‘Ugh, even worse pregnant,’ because that’s when I actually broke down because something I’m so grateful for and to me is a miracle, you’re like mocking and it’s a bad thing,” Teddi explained. “Kind of like, eff off, you don’t even know me.”

Teddi and Sutton left things off during Part 1 of the reunion. But they won’t let a little black romper get in the way of their friendship. If Sutton reached out to Teddi after her firing, then they must be on good terms. RHOBH fans praised Sutton for not getting involved with drama.