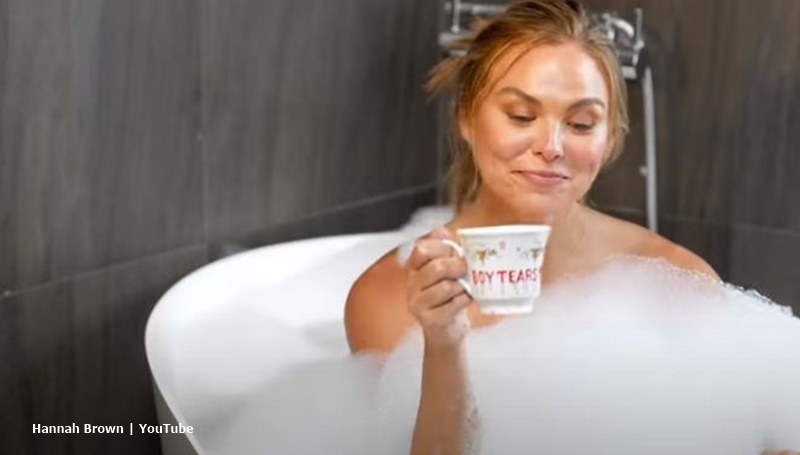 Bachelorette alum, Tyler C started his new YouTube channel in August this year. On August 12, he dropped his introductory video there. And now, Hannah Brown also started one. She mirrored Tyler as she promised to spill all the tea. And, fans of the show thought the clip was hilarious.

We reported that Tyler dropped his intro video for his new YouTube. It opened with Tyler sitting in a very bubbly bath. He watched a short clip on his laptop where Hannah told him she loved someone else. Then, he said, You think you know me?” And, he added, “Yall don’t have a clue.” At that point, Tyler switched off his laptop. Plenty of fans go over there now and watch his channel which brings all sorts of adventures that Tyler enjoys.

On Thursday, September 24, Hannah Brown, the Bachelorette lead who chose Jedd over Tyler C, also debuted her new channel on YouTube. Actually, she mirrors Tyler a bit. Hannah also sat in a very bubbly bath. In front of her, she worked away tap-tapping in the keyboard of her laptop. Then, she said that she intended on “spilling all the tea.” When Hannah announced the channel on Instagram, plenty of ABC fans noticed how she pretty much copied Tyler.

The same clip that debuts Hannah’s YouTube featured on her Instagram. She captioned it with, “It’s time to tell my story… my way. Trailer for my new YouTube channel is here! ✨ Link in my bio to watch the full video + subscribe.” Plenty of fans responded to it. One said, “ooo hannah and tyler both did it in a bathtub.” Other fans really laughed at that comment.

Another Bachelorette fan commented, “Burrrrrn on Tyler’s intro video! 🤣.” And, another one wrote, “Here for the mirroring 🐸🍵.” Actually, plenty of fans mentioned they did that for a while now. But, one very sharp-eyed fan noticed that the teacup in Hannah’s video said, “BOY TEARS!!” Other fans also loved that little jab. Another fan wrote, “ITS THE ✨BOY TEARS✨ TEA CUP FOR ME !!”

Meanwhile, over on YouTube, plenty of other fans also commented. One said, “The low key playful shade on Tyler C. Geniussssss.” Actually, lots of fans loved the video and many agree that they sit on tenterhooks for more. One fan summed it up by commenting, “Omg yes Hannah! You’re so genuine and funny…So excited for this content😂🤪.”

The Bachelorette and Dancing with the Stars alum told fans that she plans on continuing her story. And, many people sound there for it. What did you think of the way she mirrored Tyler C? Sound off in the comments below.