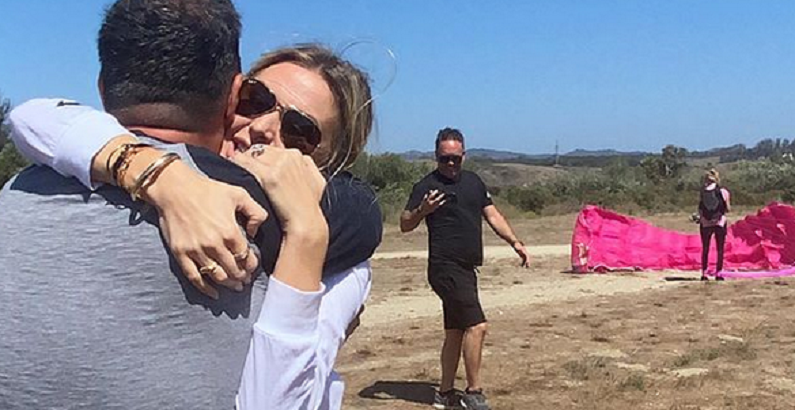 Earlier this month, Lala Kent announced her pregnancy. On her 30th birthday, she shared the news with her fiance Randall Emmett. The couple just had their gender reveal party over the weekend. Lala is having a baby girl, which she is just over the moon about.

She can’t wait to share the photos of her daughter. The Vanderpump Rules star just opened an Instagram account with the handle @givethemlalalbaby. The profile picture teased “Coming Soon.” The bio simply states: “I arrive [in] April 2021.”

Lala will surely show her baby off on social media. But will she share her pregnancy journey on Vanderpump Rules Season 9?

The model shared whether she would show her baby’s birth on Vanderpump Rules. Currently, Season 9 is up in the air. It’s unclear whether if the show is coming back at all. Bravo has not yet confirmed the next season.

As for Lala Kent, she’s not “opposed” to filming her baby’s birth on the show. She hypothetically spoke about the idea with Us Weekly on Tuesday, September 22. Since Stassi Schroeder is no longer on the series, fans will learn about Lala’s pregnancy. It could become the focal point of the series.

“I would not be opposed to having a film crew there during the birth,” Lala told Us Weekly. “For me, it’s something you’ll have forever, you know? Bring them in.”

However, Season 9 production is up in the air due to the coronavirus pandemic. Back in July, an insider told Us Weekly that the cast hasn’t heard anything about resuming filming. For now, Lala is “super protective” about her and Randall Emmett’s unborn child. She was also private when it came to sharing their relationship on the show before he joined Season 8.

Lala explained that she didn’t like it when Randall posted their baby’s sonogram photos. However, she just opened an Instagram account for their child and shared the sonogram in the Instagram Stories. She understands that she’s on a reality show, but she wants to have a happy medium. But she wants to remain as private as possible.

“I’m on a reality TV show. I’m usually like, ‘Mention it all. The good, the bad, the ugly,” Lala explained before adding, “And now all of the sudden I’m like, ‘No don’t post anything. Don’t talk about that.'”

But Randall claims that he likes to “live in the moment.” He shares these updates for his friends, who he doesn’t see regularly. The Hollywood producer doesn’t think everyone cares about their pregnancy journey. He also plans to “post the birth of the baby” on Instagram when it happens.

She thought she was having a boy

The Irishman producer already has two daughters, London and Rylee, with his ex-wife Ambry Childers. Randall had a feeling they were having a girl. But Lala Kent thought for sure she was having a boy. She thought she was going to break that streak for him.

“I just assumed I’m having a boy,” she previously explained to Us Weekly on Tuesday. “When I saw the pink parachute, it was a bit of an adjustment. And then I saw my mom, and I just bawled because I get to have that. I get a little mini Lala.”

Randall said he “never thought for one second” that they would have a son. He feels he was meant to be a girl dad.

“I feel like I’m really good with girls,” he said. “And I’m old. I feel like if we had a boy, he would be like Tarzan off the walls.”

Would you watch Lala Kent’s pregnancy journey on Vanderpump Rules? Sound off below in the comments section.

‘Sister Wives’: Meri Brown & Robyn Finally Getting Along?
‘Sweet Home Sextuplets’ Courtney Tries Baking
What Do We Know About The Future Of ‘Bringing Up Bates’?
‘Love After Lockup’: Shavel Shows it All
Barbs Claims Jenelle Never Got Custody Of Jace