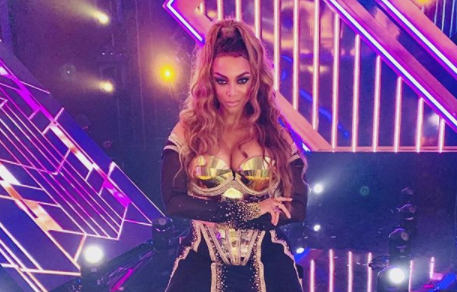 We just finished up week 2 of Dancing With The Stars Season 29. Before the season even kicked off, fans were vocal about their feelings regarding Tyra Banks. They’ve made it pretty clear that they don’t like Tyra as the host and want Tom Bergeron back as soon as possible. But even so, Tyra is holding her head high and pushing the haters out. She wants everyone to know that she is here to stay.

After this week’s episode, she addressed viewers on TikTok.

“Tonight I hosted the second episode of Dancing with the Stars … and yeah, it wasn’t perfect,” Tyra told her audience. “Yeah, I had a lot of fun but I messed up, I said the wrong words, but I kept, kept going.”

She compared her experience with that of Skai Jackson. The 18-year-old Disney Channel star had a stellar performance in week 1, but then stumbled during her routine during week 2. The judges noticed and significantly reduced her score. But even so, Skai kept dancing and made it through to week 3.

Check out the TikTok here:

Even though Tyra Banks seems determined to make it, it has to be hard to drown out all the hateful words. This week, Chirshell Stause and Gleb Savchenko performed to “This Is Me” from The Greatest Showman. After the performance, Tyra commented on how powerful the lyrics are and what it meant to her.

“When the sharpest words wanna cut me down, I’m gonna send a flood, gonna drown ’em out,” reminds Tyra of how far she’s come and that she doesn’t need to pay any attention to the haters.

Even Tom Bergeron quickly defended Tyra Banks to fans. He recently took out some of his anger out in a smash room, and one fan asked if he would smash any photos of Tyra.

“Nope, nothing against Tyra. I teased the mirror lip poster, but that was having a laugh at the marketing, not personal,” he said.

Tyra said from the beginning she has a lot of respect for Tom. She wants to honor him with her own performance. She even scrapped a lot of her own original ideas after listening to fans.

“I have respect for him. And when the network called me, I sat on it for a very long time, because I knew what Tom had done,” said the new hostess.

No matter what Tyra does, it really seems like some DWTS fans just won’t let it go.

Tyra Banks once said, “We need to exhale, turn off the news and turn on the fun. And we need to dance.” Perhaps these fans would feel much better if they were willing to forgive the new hostess and move on.

Dancing With The Stars returns for Disney Night on Monday.

‘RHOBH’ Star PK Kemsley Slams Troll, Suggests ‘Brain Surgery’
Hannah Brown Posts ‘Sun’s Out, Buns Out’ Photo
Lisa Rinna Slammed For Stripping Down For A Good Cause
Jill Duggar Claims She Needed An Attorney To Get Money TLC Owed Her
Tim Burton Could Bring ‘The Addams Family’ To Netflix