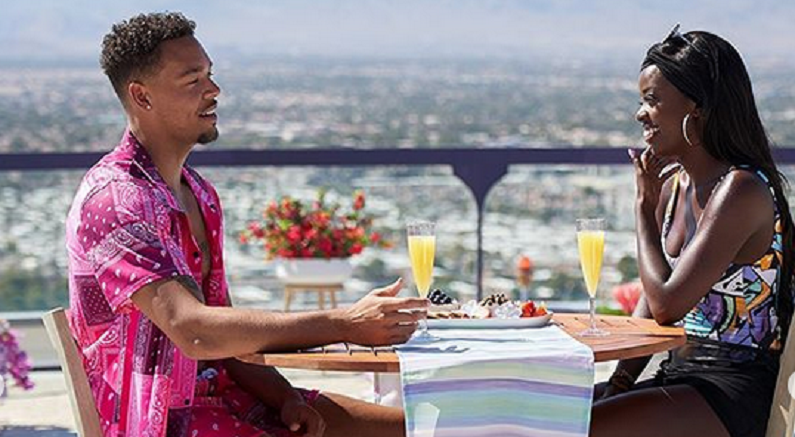 Love Island couple Justine Ndiba and Caleb Corprew have become one of America’s favorite couples. Even model Chrissy Teigen revealed that she loves the couple dubbed “Jaleb.” Fans can’t get enough of their wholesome and sweet moments. But they wish producers would focus more on Justine and Caleb rather than Johnny and Cely.

Johnny Middlebrooks and Cely Vazquez’s relationship went smoothly at first. In his bio, Johnny describes himself as a reformed player who wants to find love. Then, his ex-fiance exposed his bad boys ways on social media. When Johnny entered Casa Amor, he ended up under the sheets with Mercades and had to reveal all to Cely after the Twitter challenge.

Wednesday night’s episode is said to focus on Johnny asking Cely to be his girlfriend. But fans are getting sick of the “toxic” couple since they can’t forget what he did to Cely. They also feel that Justine and Caleb barely get any screen time.

The show has been accused of being racist from the beginning. They don’t like how the boys ignored Justine. Now that she’s found love, fans want more Justine and Caleb moments. But the Love Island producers mostly focus on the rocky relationships and the drama that goes on. Amid the drama, Justine and Caleb remained devoted to each other.

Fans love the couple’s flourishing relationship. Justine and Caleb are mature and honest when it comes to their feelings. They narrowly avoided all of the drama and temptations that have come their way. But fans think it’s not fair that they don’t have as much screen time as the other couples on the show. Here are some of the tweets during Wednesday night’s episode:

Other fans accused the producers of being “racist” for not showing Justine and Caleb. Regardless, Love Island fans will continue to vote for their favorite couple. They’re holding out hope that Justine and Caleb will make it all the way through to the end and win the show. They won’t let the producers skew their views.

It's the open & healthy communication for us 🥰 #LoveIslandUSA

Fans are sick of Johnny and Cely

Love Island fans don’t understand why everyone is suddenly forgiving Johnny, especially after what he did at Casa Amor. However, these fans also know his other secret, which Cely still doesn’t know yet. Needless to say, Johnny is not well-liked among viewers. But Johnny wants to repair his image.

Tuesday night’s episode showed Johnny planning his grand romantic gesture. He told the boys that he wants to ask Cely to be his girlfriend in a special way. Then he shared his plan with them. It felt more like an engagement proposal.

Love is in the air… & the boys dressing room 💕 #LoveIslandUSA

One fan slammed the show for focusing on the “toxic” couple. “The way they’re pushing a toxic relationship to the public instead of a healthy and mature relationship why do they hate to see a Black couple win,” the fan asked.

Do you want more Justine and Caleb moments on the show? Sound off below in the comments section.

‘The Grand Tour’s’ Jeremy Clarkson Is ‘Kind Of Bored’ Waiting For The ‘Madagascar’ Episode
How Do ‘Love is Blind’ Stars Lauren and Cameron Keep it Fresh?
Jamie Lynn Spears Actually Auditioned For This Teen Movie
‘Sweet Home Sextuplets’ Fans Slam Eric Waldrop For Shopping With No Mask
Janelle Brown Seemingly Confirms A New ‘Sister Wives’ Season’s In The Works