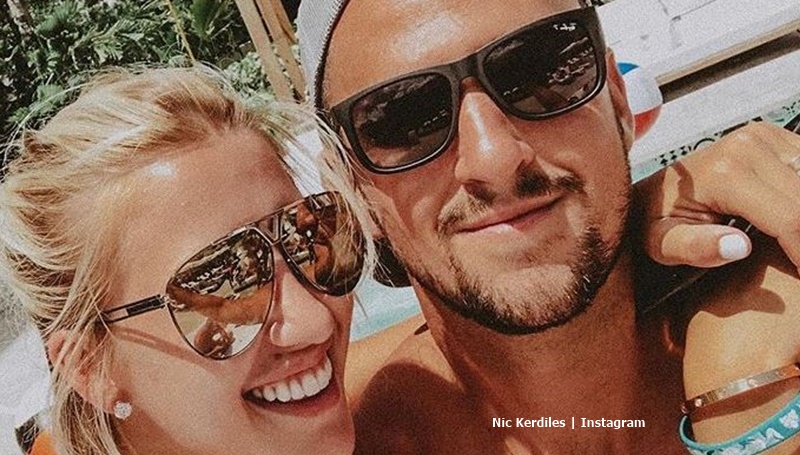 Savannah Chrisley and Nic Kerdiles split this month, so media interest ranks high right now. They met in 2017 and got engaged, broke it off, but stayed together. This time though, it looks like the split’s permanent. Some critics think she wants a man with loads of money and high celebrity status. But Nic, although quite well-off, keeps a rather low profile.

Fans of Chrisley Knows Best know that Todd made money, went broke, and then rebuilt his fortune through real estate. And, the USA Network reality TV show does well too. So, Savannah grew up in a family used to wealth and a good lifestyle. In fact, she hangs within a social group that doesn’t check under the couch cushions for a lost dollar. So, it’s no wonder she felt comfortable with Nic who’s estimated net worth sits at between 5 to 10 million dollars. Most of that came from his career as a pro-hockey player.

Previously, Savannah Chrisley dated people worth a few pennies as well. In the past, she coupled with Country musician, Blaire Hanks. His current net worth sits at about 1.5 million dollars. And, Savannah dated NBA player, Luke Kennard for about four months. In 2018, his net worth sat at around $2.5 million. Very briefly, she got linked with Colton Underwood from The Bachelor and he’s worth about a million. So, Nic held the biggest pile of money of all her boyfriends.

This woman right here has been the BIGGEST blessing in my life. She has the purest heart out of anyone that I know. She has treated me with nothing but love and respect in our 3 years together. No one other than our families know everything we’ve gone through in the last 3 years and for that, I ask to respect that privacy. There was so much genuine love in this relationship and I’m truly blessed to have been able to spend three years of my life with Savannah. I still look at her as the type of woman I want to spend the rest of my life with. She is everything one could want in a mother, daughter, wife and friend. I love you kid to the moon and back and God has a plan for us!

Savannah recently shared a kickboxing workout and namedropped the diet brand South Beach Diet. The Blast noted that she probably earns a good deal of money from those promos. They checked it out, and a celeb could earn anywhere from “$10,000 [per post], depending on the platform, and 1 million followers and up, you’re getting into territory where they can charge $100,000.”

Plus, Savannah Chrisley drops a cosmetics line this year. Then, she earns from the shows Chrisley Knows Best and Growing Up Chrisley. The Sun reported in August this year, that Savannah’s net worth sits at about $500,000. It’s not bad for a 23-year-old at all. And, her net worth probably climbs significantly in the years to come. So, maybe she never needed Nic for his money as some critics assert.

What if I told you that you’ll have @sassybysavannah before Christmas?! 😏😍😭 AMAZING quality products at an affordable price…GET READY!! Can’t wait to show you all how to achieve my signature look! Follow @sassybysavannah to stay up to date with all announcements ❤️

Why did Nic Kerdiles and Savannah split?

All over the Internet, fans wonder why Nic and Savannah split. Some speculate that Todd Chrisley caused the split. And others think Savannah just looks for someone with a higher celeb profile. One of the wilder theories that emerged suggested Savannah prefers girls to men. But, nobody really knows as the ex-couple simply won’t dish on the dirty laundry. However, with her stunning looks and bank balance, it’s not unlikely that Savannah soon finds another guy.

What do you think about Nic? Did Savannah Chrisley like his money more than his personality? Sound off in the comments below.