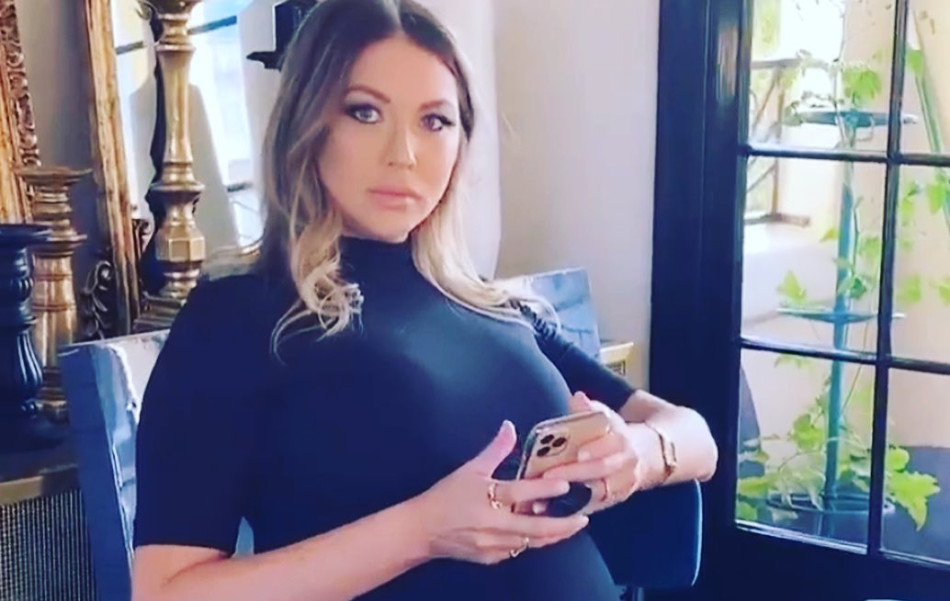 In the days after her firing, Stassi announced she’s pregnant with her first child with fiance Beau Clark. The couple expects their baby girl in January. Stassi and Beau have been mostly quiet on social media in the months since her firing. They have only posted a handful of new content on their respective Instagram feeds.

But on September 21, the former Pump Rules star shared a new photo with her baby bump on full display.

Stassi and Beau will be parents of a baby girl in just under 5 months. To mark the occasion, the Pump Rules alum shared a picture of her ever-growing baby bump. In the photo, Stassi wears a white dress that puts her baby bump on full display. Her fiance, Beau Clark, stands next to her, beaming at her belly. He appears to be putting his finger on Stassi’s belly button.

Stassi got cutesy in the caption. She wrote, “25 weeks. Our Clark Passenger is poppin’.” The ‘Clark passenger’ is a take on her former nickname, ‘dark passenger.’ It’s what she calls the side of her personality that rages at people, particularly her romantic partners.

25 weeks. Our Clark Passenger is poppin’.

During Season 8 of Pump Rules, the spoken-for ladies of SUR made a pact. They vowed to get pregnant at or around the same time, so their kids could grow up. The pact seemed to be a joke, but it’s quickly becoming a reality.

At the beginning of September, Lala Kent revealed that she’s expecting her first child with fiance Randall Emmett. Both Stassi and Lala had to postpone their 2020 wedding plans due to the coronavirus. But it seems they found something else to keep them busy during quarantine.

Last week, Lala and Randall had a gender reveal party with a skydiver. The parachute color would reveal if the baby were a boy or a girl. A skydiver in a pink parachute descended to the ground: they are having a girl.

On Monday, September 21, Brittany Cartwright shared the news that she is also pregnant! As fans know, Brittany married Pump Rules bartender/model Jax Taylor in 2019. Jax and Brittany will host a gender reveal party this coming weekend.

So, that’s three Pump Rules stars expecting babies in 2021. Fans are already betting on which SURver will be the next to get pregnant. It’s a tie between Kristen Doute and Katie Maloney-Schwartz.

Tamron Hall Responds to Reports That Stassi Was ‘Ambushed’ During Interview

Tamron Hall landed the exclusive first interview with Stassi after her Bravo firing. She asked Stassi some tough questions, particularly about Stassi’s past behavior. While the Pump Rules star appeared calm in the interview, she reportedly wasn’t happy with the way the interview went.

Stassi’s unease got back to the talk show host. Tamron addressed the concerns about the interview. She said that Stassi was well-prepared. Furthermore, Tamron denied ambushing the Pump Rules star. Instagram fan account @queensofbravo captured Tamron’s full statement. You can watch it here:

After reports that Stassi felt “ambushed” and feeling unprepared by @tamronhallshow’s questions, Tamron addresses those reports AND gives a peek behind the scenes of how much information they gave her 💀 • #rhobh #pumprules #tamronhall #realhousewives #stassischroeder #tamronhall

It will be interesting to see going forward if Stassi returns to social media full-time now that she’s spoken her piece. The Blast reports that fans flooded Stassi’s comment section with wishes of a spin-off featuring her pregnancy journey.

While Bravo cut ties with the Next Level Basic author, another network could very well offer Stassi a new gig. Time will tell. Time will also tell if Bravo cancels Pump Rules or brings it back for Season 9. Follow our social media to stay up-to-date on the latest TV news!

’90 Day Fiance: The Other Way’ Stars Biniyam Finally Shares Pic Of His Son
Did Derick Dillard’s Sister-In-Law Shade Jim Bob & Michelle Duggar?
Pregnant Stassi Schroeder Can’t Sleep, But She Sure Is Organized
Fan Insists Savannah Chrisley Looks Like ‘A Dude’ With No Makeup
‘DWTS’: Kaitlyn Seemed Fearful Of The Latest Dance, But She Managed To Do OK