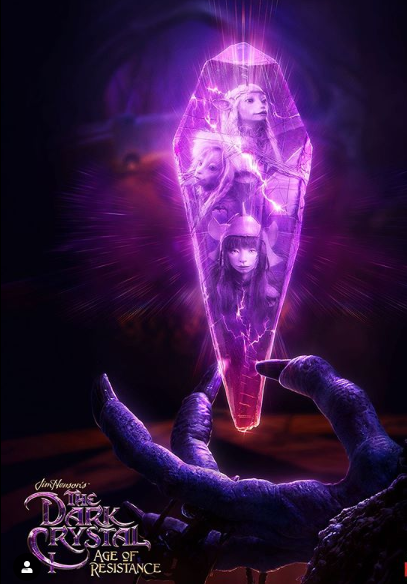 Netflix confirmed the cancellation of The Dark Crystal: Age of Resistance on Monday, September 21, 2020. The announcement came immediately on the heels of the show won the Primetime Emmy Award for Outstanding Children’s Program. Fans and critics have been very vocal about their disapproval and confusion with this decision. One such fan, @dregfulcrows gave voice to this frustration by writing: “Now that they’ve gone and cancelled the dark crystal after it just won an emmy what i would like to know is WHAT WAS THE REASON.”

In May 2019 Netflix announced the prequel series to the Jim Henson 1982 cult favorite The Dark Crystal. Fans of the movie were ecstatic about the release of The Dark Crystal: Age of Resistance. The series focused on the events that lead to the world they recognized from the original movie. What was especially exciting how close this series was to the original movie in aesthetic. Tasha Robinson from The Verge, wrote: “what’s most compelling about this trailer, though, is the stunning fidelity to the original film.”

Meet the creators of the Dark Crystal: Age of Resistance. HAPPENING NOW! Hosted by: @movingimagenyc

Age of Resistance combined the classic puppetry of Henson with modern special effects to create the stunning world of Thra. The series boasts an impressive 88% critic’s approval on Rotten Tomatoes as well as a 95% viewer approval. With these ratings, voice talents including Taron Egerton, Ayna Taylor-Joy, Mark Hammel and so many others; on top of the Emmy win Netflix’s decision to cancel the show is even more confounding.

Netflix released the following statement when it announced the cancellation of the series. “We are grateful to the master artists at The Jim Henson Company for bringing The Dark Crystal: Age of Resistance to life for fans around the world. We’re thankful to the executive producers Lisa Henson and Halle Stanford, and Louis Leterrier, who also directed all episodes, as well as the writers, cast and crew for their outstanding work and thrilled they were recognized with the Emmy this weekend.”

Can Fans Hold Out Hope?

Netflix is often a fan’s last hope for saving a series that has been canceled. They brought back several shows like Lucifer, Designated Survivor, and Fuller House. Netflix saved these shows after being canceled; unfortunately Age of Resistance does not have that hope. Linda Henson made a statement saying, “We are so grateful to Netflix for trusting us to realize this ambitious series; we are deeply proud of our work on Age of Resistance, and the acclaim it has received from fans, critics and our peers, most recently receiving an Emmy for Outstanding Children’s Program.”

Henson continued her statement adding: “We know fans are eager to learn how this chapter of The Dark Crystal saga concludes and we’ll look for ways to tell that story in the future. Our company has a legacy of creating rich and complex worlds that require technical innovation, artistic excellence, and masterful storytelling. Our history also includes productions that are enduring, often finding and growing their audience over time and proving again and again that fantasy and science fiction genres reflect eternal messages and truths that are always relevant.”

With these words of encouragement; this fan can only hope that The Jim Henson Company will follow through on this promise. I don’t think I can wait almost forty years to find out what happened after the Season 1 cliffhanger.