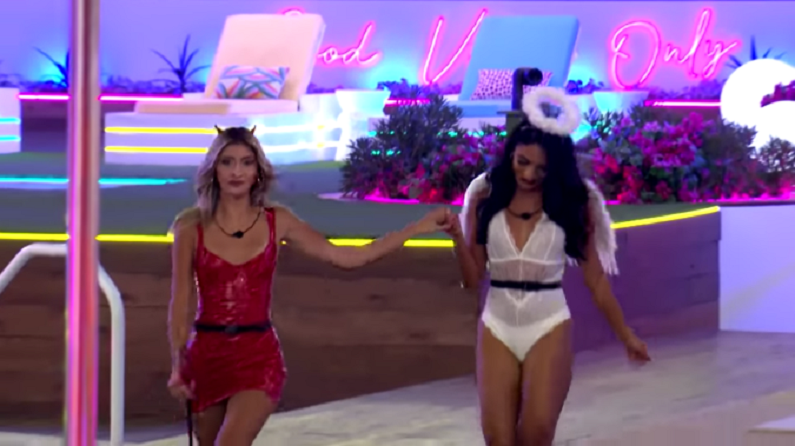 Love Island has two new girls joining the villa. And they have their sights set on Calvin and Carrington. In the new sneak peek for Tuesday night’s episodes, they made a shocking entrance after the elimination. Connor and Bennie had to pack their bags and go home.

Halloween must’ve come early to the villa. Because Lakeyn and Julia are dressed as a devil and an angel. That’s because they have a special treat for the guys. The girls arrived at the end of the heart rate challenge to perform for them, while the other girls have to watch from afar.

Do they set Calvin and Carrington’s hearts racing?

In the new exclusive sneak peek from Love Island, the new girls take over the villa in an interesting way. Lakeyn and Julia are the most creative with their entrance. They arrived dressed as a devil and angel pair. They came during the steamy heart rate challenge that took place among the couples.

Calvin’s eyes almost pop out of his head when he sees them. Some of the other girls look uncomfortable watching the new girls perform. Justine mutters, “Watch yourself,” as Cely says she feels sick to her stomach.

After the challenge ends, it’s revealed that Calvin raised Laurel’s heart rate the most. Meanwhile, Lakeyn raised Carrington’s heart. And now the feeling is mutual. Shortly after the challenge, the girls claimed both men. It’ll be an interesting fight.

“When I saw Carrington, I was like, ‘Woah. He’s so hot,'” Lakeyn says in the exclusive video published by People. “But you know what, I was kind of surprised by Calvin. He just had the cutest face. I was giggling because it looked like a baby deer! And he has some swag. He’s like, clever.”

Julia was especially impressed with Calvin. She noticed his expression when she entered the room. She was already making her post-game plans to talk to him.

How do the other Love Island girls feel?

The other girls made it clear they’re not afraid of a little competition. They will do whatever it takes to keep their men around. As Love Island fans know, Moira is still interested in Calvin. However, she’s been up-and-down about him for most of the season.

“I am going to be completely transparent with you — a little competition puts me right back into [the game],” Moira told Cely, Kierstan, and Justine. “It’s not a healthy reason, but I’m like, yo, Calvin.”

Maybe Lakeyn and Julia’s arrival will allow Moira to pay attention to her feelings. As for Kierstan, she’s not worried.

“Oh, I love competition,” Kierstan responds. “There is no competition.”

The original girls already have a leg up on the competition. The sneak peek shows two of them getting a text message about a date outside of the villa with the boy of their choice.