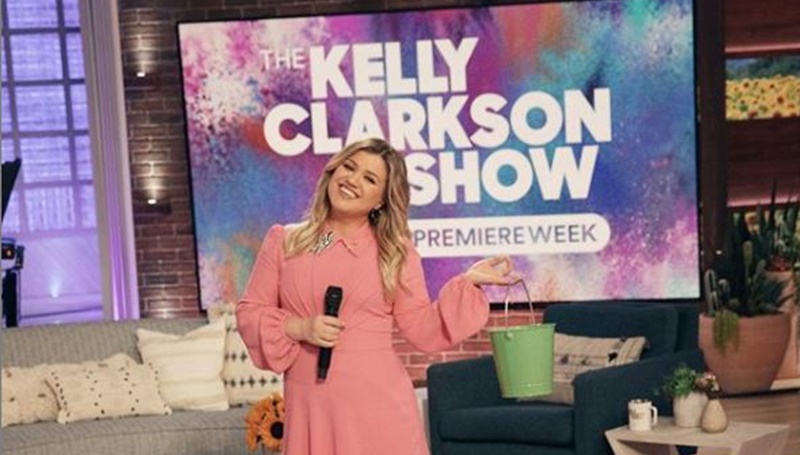 Kelly Clarkson came back on NBS’s Kelly Clarkson Show after a long absence. Busy with The Voice and standing in for Simon Cowell on AGT, she also went through personal issues. In the premiere of her show on Monday, she described 2020 as a “dumpster fire.”

Kelly Clarkson talks about the ‘dumpster fire’ during the premiere

Filmed without a physical audience, Kelly spoke about her divorce from Brandon Blackstock. Emotionally, she opened up about 2020. In fact, it brought some horrid-sounding “changes to [her] personal life.” And apparently, she just “never saw [the divorce] coming.” Well, she actually filed for the divorce. But obviously, she never thought that would happen. So, she talked about this year as a “dumpster fire.”

The American Idol alum said that she finds it very “hard” right now. Of course, she worries because the couple raise four children. So, their hearts matter to Kelly Clarkson. Then, she noted, “divorce is never easy. And we’re both from divorced families.” That explains why they know the best thing for the kids revolves around “[protecting] our children.” Therefore, she can’t talk about all the nitty-gritty details of the split.

Music helps Kelly get through

Since before her appearance in American Idol, Kelly says she used music as a sort of catharsis. So, she uses “songwriting as a coping tool,” E!News reported. The outlet wrote,  “My mom told me to start writing and that’s actually how I get my feelings out,” the 38-year-old said.” Songwriting becomes her main focuses as she navigates this difficult time. Possibly, in time, fans hear some of those songs. Plus, she also finds solace by listening to music.

After seven years of marriage, it can’t be very easy dealing with the divorce. But, fans loved seeing her back on the show. One of them said on the show’s Instagram, “The best host. No scandals or need to apologize in her premiere. Just a good person doing a great job. An american idol who personifies the american dream. ❤️” And, another  Kelly Clarkson fan noted, “I am sorry for your personal situation but I’m so proud you put your big girl panties on and keep going!.”

The #KellyClarksonShow Season 2 Premiere in pictures 📸😍

Fans talked about “cheating” back in July

In July, Kelly Clarkson shared a post about a “challenging ” and “overwhelming year.” One fan commented, “I hope you and your children are doing ok..i know you said you had one hell of a year.” They added, “I don’t know how it is to go through a divorce, but I do know life is hell in many ways.” Then, another fan said, “Just heard you were cheated on by Brandon.”

Well, whatever happened, loyal fans of Kelly Clarkson simply hope it all works out for the best.

Why Are ‘Extreme Sisters’ Christina & Jessica Naked In The Woods?
Todd Chrisley Impresses Fans With Insightful Post
Tammy Slaton Might Be In Legal Hot Water: Wait, Is She Being Sued?
‘Return to Amish’ Season 6 Episode 9 Recap: May 10
Would Derek Hough Ever Return To ‘DWTS’ As A Pro Dancer?