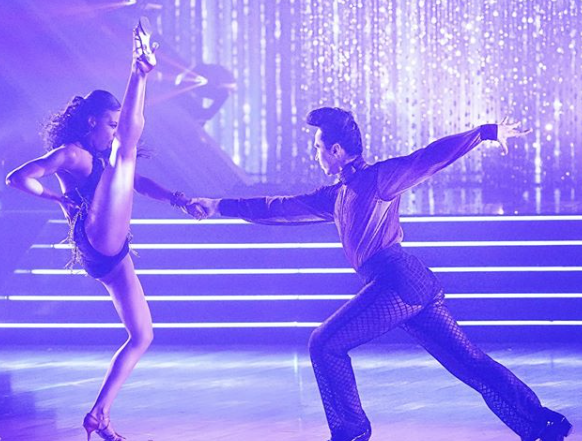 Olympic figure skater Johnny Weir is excited to compete for the Mirrorball Trophy this year. Many of his Dancing With The Stars competitors believe he will be a huge challenge to beat. But even though Weir has lots of experience competing, these dance styles are an entirely new experience for him.

“I’ve never had formal dance training. Growing up it was common for young skaters to take ballet, or jazz or ballroom dancing, but my family didn’t have the resources to do that,” says the 36-year-old athlete. “So everything that was artistic about my skating came from within. And there are so many things that I know that are natural for skating that translate into bad habits in the ballroom world, so I’m definitely at a very steep learning curve.”

Johnny Weir Thinks He Still Has Quite A Bit To Learn

Figure skaters typically do well on Dancing With The Stars, but Weir believes they don’t have any special advantage.

“Yes, we are predisposed to musicality and there are certain aspects of skating and figure skaters that translates well into the ballroom world. But the way I am equating it is kind of like having a football player have to go out and play a major league baseball game eight days after starting to play baseball,” he explains.

Weir goes on to say that everyone expected him to do well on opening night. But even so, he admits his debut performance wasn’t his best. In spite of this, he and his partner Britt Stewart scored 18 points for their spicy Cha Cha. They choose Buttons by The Pussycat Dolls and it definitely worked.

It was a great start, but there is definitely room for improvement.

So What’s Coming Up Next?

Tonight, the couple will perform a Tango to Lady Gaga’s Poker Face. Fans are excited to see what Johnny Weir and Britt Stewart will bring to the competition next. Hopefully, their performance this week will be strong enough to keep them in the competition. Plenty of other couples scored much lower, so it’s likely they will be safe for a few weeks longer at least.

Rounding out the bottom three are Carole Baskin, Chrishell Stause, and Charles Oakley. The odds are that one of them will perform for the last time tonight. Who do you think will go home this week? Let us know in the comments. We’re curious to see what you think.

Matt Roloff Reflects On When Zach Almost Died: ‘Thought His Heart Stopped’
Whatever Happened To ‘According To Chrisley?’
Lifetime’s ‘Christmas On Ice’ Is Skating Into It’s A Wonderful Lifetime
How Do ‘Love is Blind’ Stars Lauren and Cameron Keep it Fresh?
‘DOOL’ Spoilers Week Of October 19: Salem Blackout, Prison Break