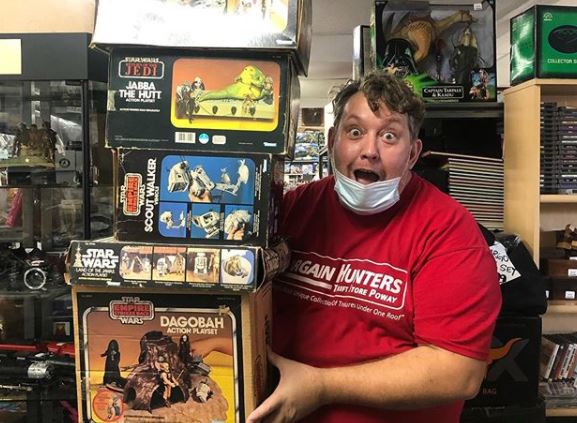 Rene Nezhoda, one of the stars of the popular A&E series, Storage Wars recently bought a unit that was owned by the actor Daniel Baldwin. Do you wonder what was inside?

Rene Nezhoda, a well-known entrepreneur, buys storage units for a low price in hope of scoring an item, or items, that can be sold for big money! Rene has been a part of the popular Storage Wars series on A&E and runs his store called The Bargain Hunters thrift store. He has made his money from his appearance of the highly-rated show and from buying and selling the merchandise he finds.

He is the third youngest of the four Baldwin brothers, all of them have become actors. Baldwin’s acting debut was in the television film Too Good to Be True in 1988, which he followed with roles in the films Born on the Fourth of July (1989), Harley Davidson and the Marlboro Man (1991), and Hero (1992). He returned to television in 1990 for the short-lived sitcom, Sydney filmed in 1993. Baldwin was cast in the Baltimore-based cop show Homicide: Life on the Street. All this info wonderful info on Daniel Baldwin was courtesy of Wikipedia!

What did it cost the Storage Wars star?

Rene Nezhoda recently bought a storage unit reported to have been owned by the famous Daniel Baldwin, actor, director, and producer. As for how Daniel Baldwin’s storage unit came up to auction, according to TMZ, they say they we’re told it’s from 2009 and he must have stopped paying the bill because he racked up $40k in fees to the facility. Sounds like he just forgot about it.

What was inside this storage unit?

There were some boxes of random items, but according to Rene, most of that stuff is worthless junk… including old clothes, CDs, movie scripts, stereo gear, and Christmas decorations. Rene estimates model trains, train tracks, and some related objects that Rene says it can be worth as much as $2,500, so he thinks he can break even by doing some work and marketing the items correctly. This isn’t a big win for the Storage Wars star.

Rene told TMZ that he’s less than happy with the false Baldwin unit purchase, and when you compare it to his recent discovery of Kobe Bryant treasures, or even his ‘Dude Perfect’ score last year. All those scores returned more profit than Daniels unit could, so the bar was set high! Rene told TMZ that there was also a safe belonging to Baldwin up for auction, but he didn’t win that one.

Is anyone else wondering what was in that safe? Too bad that won’t be on Storage Wars. So keep an eye out to find out what is inside of that one.