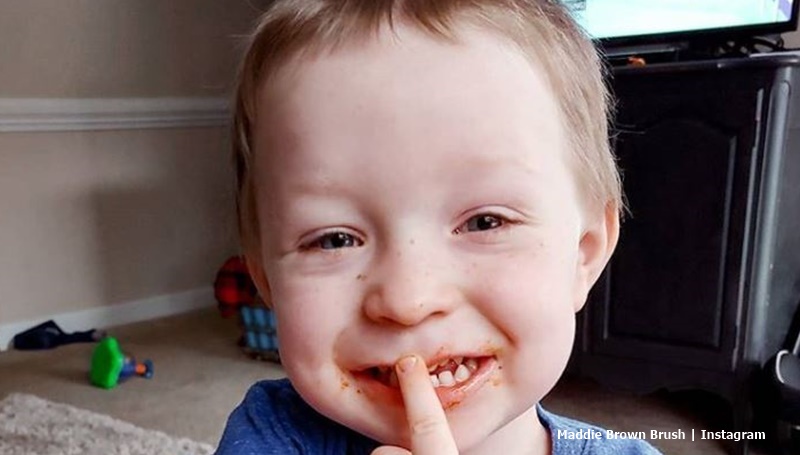 Sister Wives star Maddie Brown Brush shared a photo of little Axel that made fans feel some anxiety. He seems a very active little boy, so he lets off some steam now that the parks reopen. Maddie talked about how she lets him learn from his own mistakes.

Maddie’s little boy Axel is growing up fast. No longer a baby, we reported that he recently started Pre-K. At the time, Maddie said, “First day of PreK 3s for Mr. Axel. My heart can not handle how fast he is growing 😭.” Since then, Maddie shared a photo of Axel playing in the park.  Maddie took to her Instagram on Sunday and shared the photo of Axel climbing. Actually, he seemed quite high up on the bars.

The Sister Wives star captioned her post with, “One time, I gave birth to an adrenaline junkie! I thought maybe he outgrew it… until the parks reopened.” Maddie then explained she tries to let him “learn” for himself.  She recalled that as a child, she also did crazy things but her mom and dad let her “learn firsthand.” So now, she tries the same thing with Axel.

Hard letting Axel learn for himself during playtime

Maddie Brown Brush feels that sometimes it’s a bit hard letting kids learn their own boundaries. But, she noted that he “loves being outdoors again!” Then she added, “💛 P.S. yes he did try to jump off after, I made him climb down a couple feet.” Obviously, Maddie talked about how her son might slip and fall and it ends in tears. But, some fans felt it too much and one even said, “this is giving me anxiety just looking at it lmao. But kids being kids!”

Then, someone admonished the Sister Wives star, They said, “Safety first. Must explain to them what will happen. The word NO is needed at times, a parental obligation.” But one fan gets it. They said that they learned about standing back sometimes which made for some frantic moments. However, her kids emerged from childhood “unscathed” despite some worrying times.

One time, I gave birth to an adrenaline junkie! I thought maybe he outgrew it… until the parks reopened. Trying to learn to let him learn himself. Constantly reminding myself of all the crazy things I did when I was a kid that my parents let me learn firsthand. Alas, I am learning that it is a learned skill to let your kids learn for themselves. (Too many learns in there? Maybe!) . So here is Axel loving life in the sunshine and being outdoors again! 💛 P.S. yes he did try to jump off after, I made him climb down a couple feet.

Moms or dads often get described as “helicopter parents.” They always hover around ready to stop anything bad happening. But, many fans understand where Maddie comes from. She worries a bit, but she also feels Axel needs to learn his own boundaries. The Newport Academy discussed helicopter parenting. On their website, they explain, “they hover close by, and swoop down to help at the first sign of trouble.”But this often results in kids experiencing “negative emotional and mental health repercussions.”

But, the site also talks about the same situation the Sister Wives mom experiences right now. They noted that “the key is whether the situation calls for parents to be actively involved. That depends on both the circumstances and the age of the child. And it’s often difficult for parents to make that call.”

Demi Burnett Seen On Date With ‘Big Brother’ Villain
Is Kaitlyn Bristowe Burning Out On ‘DWTS’?
Duggar Fans On Jinger’s Instagram Think Life As A Celeb Must Suck
Will There Be ‘Emily In Paris Season 2’? Creator Darren Star Hints ‘Oui’
‘Below Deck Med’ Jessica More Makes Revelation About Charter Guests