Fan theories on why Savannah Chrisley and Nic Kerdiles split up are running rampant on social media. Many Chrisley Knows Best fans have taken to Nic and Savannah’s Instagram to BEG for an answer on exactly why they broke up.

Unfortunately, this is a question the former flames may never feel comfortable answering. So, fans are left to form their own theories on why the breakup happened. And, let us tell you, there have been some pretty wild theories popping up. In fact, here’s the latest one fans are thinking about.

Is Savannah Chrisley batting for the other team?

Rumors started to swirl that Savannah Chrisley might be questioning her sexuality when she debuted her new, controversial hair cut on Instagram. Savannah chopped off nearly ALL of her beautiful, long hair. And, fans had pretty mixed feelings on it.

Making things worse, Savannah Chrisley was NOT afraid to flaunt her new short hair cut on Instagram. And, she even opted to sport a flannel button up top with some snug black pants in one snapshot. While she definitely had some fans who were here for the adorable pixie cut and the comfortable fashion style, others were not so supportive.

In fact, several questioned her sexuality. They noted she didn’t exactly look like a woman who was interested in dating a man. And, they were very vocal on their dislike of her haircut. Was she trying to look like a boy? That is what some of her followers insisted.

Now, Savannah was rocking this short pixie style haircut when she and Nic told Todd they thought the wedding plans were moving too quickly.

The conversation and the timing only caused those questioning her sexuality to double down on their theories.

As we previously reported, some fans think Nic got out of the relationship with Savannah just in the “Nic” of time. Some believe Todd Chrisley is to blame for ending the relationship. And, now, there are some starting to question if she might be interested in women. Perhaps she wants to explore her sexuality more before she settles down. 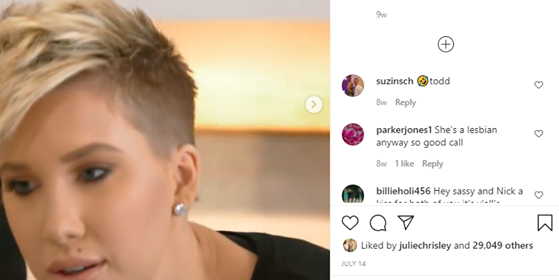 When news that the duo decided to pause their wedding plans and call of their engagement plans broke, some said it was probably for the best. Why? Because they suspected she wasn’t that interested in men.

So, do you think Savannah Chrisley could be interested in women? Or, do you think people are just placing stereotypes on her because of her short hair? And, do you think this could be why she broke up with Nic? Sound off with your thoughts!

‘Bringing Up Bates’ Star Tori Bates Shares New Maternity & Family Photos
What Do We Know About The Future Of ‘Bringing Up Bates’?
‘Mystery At Blind Frog Ranch’ and the Skinwalker Ranch
‘Bold and the Beautiful’: Steffy’s Paternity Test Shocker This Week
‘Bachelor’ Fans DEMAND ABC Make A Statement Against Bullying