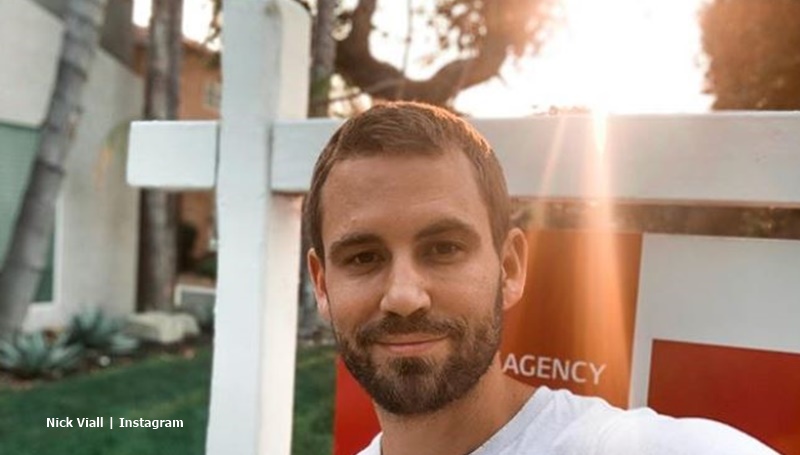 Nick Viall from The Bachelor is quite famous as a podcast celeb and from the videos that he makes. So, news about what he’s up to gets a lot of interest. Recently, Nick purchased a new home, and he shared a photo of himself in the garden. He’s wearing a bathrobe, but fans can clearly see his underwear. Dean Unglert popped in and made a hilarious comment. Many fans giggled about it.

On Sunday, September 20, Nick Viall took to his Instagram and shared his photo of himself in his new garden. He wore an open bathrobe, held a garden hose, and an Ellen coffee mug. He captioned it with, “Home owning content.” Well, it’s a funny picture, but Nick feels very proud of his new home. The Daily Mail reported that he bought his “first home in the San Fernando Valley area of Los Angeles.”

6 years ago I left a career I really liked for a chance to do something I loved. I did it at a point in my life where the expectation was to settle in and live the life I had. 6 years later I’m buying MY First HOUSE and doing what I love. It’s never too late to change things up and take a few risks.

It looks modern and “spans across 2,412-square-feet of living space. Apparently, it got remodelled in 2017 and presents “outdoor living with glass tile flooring, hardwood interior doors,” and more. Many fans laughed at the photo of the Bachelor alum. Plenty of amusing comments came in about living next door to the ABC star. One Nick Viall fan wrote, “But what do the neighbors think 😜?”

In the fans’ comments, one fan noted, “you crack me up!! This pic is excellent 👍🏻 congrats on your home ownership and great job stirring a pot for chatter and a bit of controversy! 🤣.” And another one said, “blink if Ellen is holding you hostage. I’ll come and save you.” But, Bachelor Nation alum, Dean Unglert joined in with all the funny comments. Fans thought his comment hilarious and gave him the “win.”

Dean wrote, “what we all want to know, is does the carpet match the drapes?” So many fans laughed at Dean. They told him it was funniest comment ever. Others just posted up laughing emojis. Definitley, most them thought he took the win with that. But one Nick Viall fan asked, “What does that mean?” A quick check on the Urban Dictionary explains it.

The site notes that it often refers to women. “A question used to indicate the belief that a woman’s hair is dyed. “Carpet” being the pubic hair and “drapes” being the hair on her head.”

Given the fact that people see Nick Viall in his underwear, Dean probably referred to that. And couple it with hardwood in his house, its a rather clever comment, fans agree. Some of them hinted that maybe Nick keeps that area of his body clean and shiny.

What did you think about Dean Unglert’s comment on the Nick Viall post? Sound off in the comments below.