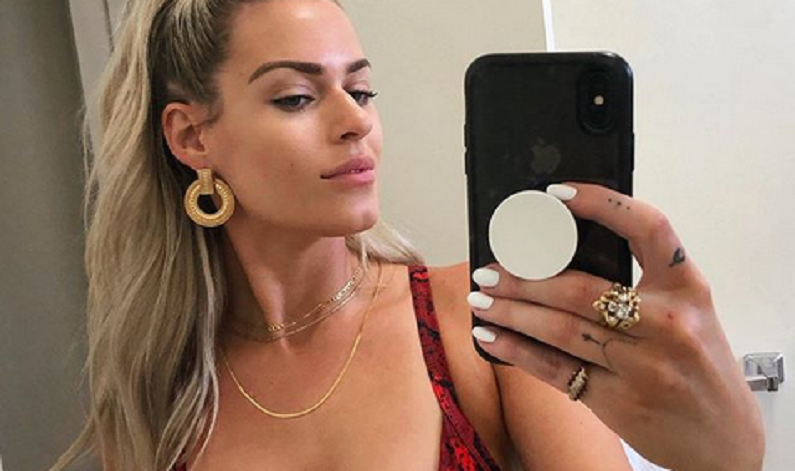 Dayna Kathan had plenty to say about Vanderpump Rules Season 8. Most of her thoughts were about Jax Taylor. The VPR newbie made an appearance on Katie Maloney’s new podcast “You’re Gonna Love Me.” TV Shows Ace previously reported that the two became friends.

They’re so close that they even worked on a project together. It turns out that it ended up on Katie’s podcast. While appearing on the Friday, September 18th episode, the SURver admitted she’s not a fan of Jax Taylor. She did not hold back on her feelings about him.

Read on to learn about Dayna’s thoughts on VPR Season 8.

The blonde beauty made her feelings clear about Jax Taylor. Dayna Kathan told Katie Maloney exactly how she felt about the bartender. The two ladies played a game of “F***, Marry, Kill.” They had to choose among Tom Sandoval, Kristen Doute, and Jax Taylor. During the game, Dayna revealed she would “kill” Jax. She slammed him for the way he treated her.

“You know what it is? He still has me blocked [on social media],” Dayna said. “He’s been nothing but an a**hole. I’m just over it. … He blocked me, he’s passive aggressively tweeted about me several times.”

However, Dayna has nothing but kind words to say about Jax’s wife, Brittany Cartwright. She called her warm and “welcoming.” Brittany and Dayna have even become good friends. As for Jax, he refuses to acknowledge Dayna or even look her in the eye.

The model joined the cast during Season 8 of Vanderpump Rules. However, she knew Jax since from the start. Despite knowing him for years, the fellow podcast host admits she doesn’t “understand” about “the way his mind works.” Although Dayna felt she and Jax got along during the last season, she saw a change in his behavior after production ended.

Most Vanderpump Rules fans complained that Season 8 felt clunky with the newbies. There were too many faces on the show. Dayna Kathan agrees with the viewers. She blamed Jax for causing more divide and shutting out the new cast members. Not only did he block Dayna, but he also blocked the other newbies on social media and he avoided getting to know them.

Dayna strongly feels that Jax took over the season with his dark behavior that emerged after he married Brittany.

“And I do feel like, in a way, and I mean, I don’t know if you’ll cut this or not, but I feel like [Jax] cannibalized part of the show this season,” she explained to Katie. “I honestly think the last three episodes were really good. And even if it wasn’t like, so married together, it was clear there were differences.”

Dayna didn’t feel that way about the other original cast members. But when she watched the show back, she wondered if she was watching “two different shows.” Now, Dayna understands how the fans felt. But she feels that the season could have turned out differently if it was like the final three episodes.

Production for Season 9 of Vanderpump Rules has not started. This has led fans to wonder if the show will return after the eighth season. However, news broke that SUR restaurant will reopen on September 23. So, production could resume shortly after.