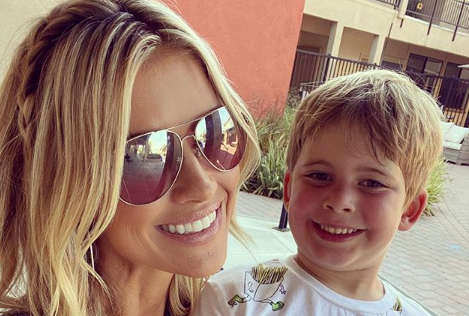 Ant and Christina Anstead have split-up according to a post on her Instagram. She said, “We are grateful for each other and as always, our children will remain our priority. We appreciate your support and ask for privacy for us and our family as we navigate the future.” This comes as a shock to fans and their friends alike. The two started dating in 2018 just two years after her divorce. They were inseparable from the moment they met.

The two wed in December of 2018 and had a son, Hudson, the September after. Christina previously married Tarek El Moussa and the two starred on Flip or Flop. They have two children Taylor, a nine-year-old girl, and Brayden, a five-year-old son.

Christina Anstead Had Spoken Well Of Her Husband

Talking to US Weekly, Christina Anstead said her relationship with Ant made her feel calmer. She said, “I don’t know if it’s just me getting older, but things that used to bother me, or that I used to take personally, or maybe since going through a public divorce. I just like, really, it takes a lot to bother me nowadays.”

She went on to say she has more patience and doesn’t sweat the small stuff. A source said it came as a shock when they announced their separation, because they hid the trouble well. The source said, “Christina and Ant have been very private about this and friends are shocked to hear the news because they seemed happy together publicly and while in front of others.” Having already gone through one public divorce, Christina likely wanted this one to be a lot quieter.

Christina also has spoken well of her ex-husband when it comes to their co-parenting skills. Tarek El Moussa is now engaged to Selling Sunset star Heather Rae Young.

Moussa said, “We’re cordial and we filmed together. We’re not hanging out on Sundays having barbecues, but you know, it’s all good. Life goes on and we’re good. We’re doing great filming together. The kids are great. And life is good.”

Ant and I have made the difficult decision to separate. We are grateful for each other and as always, our children will remain our priority. We appreciate your support and ask for privacy for us and our family as we navigate the future.

Does She Get Along With Heather Rae Young?

Christina Anstead got closer with her ex’s new lady love, Heather Rae Young, during quarantine. Anstead said, “We’ll, like, text each other random recipes right now during isolation. She’ll, like, send me whatever her favorite go-to granola bar is, and I’ll text her back whatever mine is.”

Christina asked fans to be nice with the information they have now about her relationship. She knows how trolls love to come after people at their weakest. In the post with the announcement is a picture with her and Ant in front of a sunset. She appears to have turned off commenting.