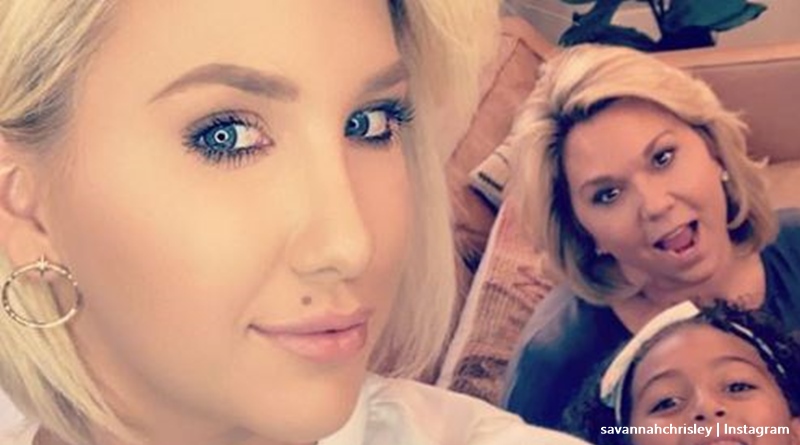 Savannah Chrisley just inadvertently proved that teeth trolls exist behind many a keyboard. Most people heard of body-shamers, and sometimes people even shame kids. Now, a combination of teeth trolls and those who slap at children makes for a rather nasty scenario.

Savannah Chrisley shares  a cute photo of her niece Chloe

Some fans of Chrisley Knows Best seem a bit confused as to how Chloe fits into the family. Actually, Todd Chrisley and Julie hold custody of Chloe, their granddaughter. Kyle is the dad of Chloe. And, he also sees his daughter from time to time. That makes her the niece of Savannah. We reported that there isn’t some “intense drama or scandal behind the reasoning. Kyle Chrisley was having a hard time with his life. Between struggling with addiction and mental health, he was not able to be the father Chloe needed.”

Now, Savannah shared a photo of herself with Chloe. Many fans appreciated the photo of the cute little kid and her every attractive aunt. Savannah Chrisley captioned it with, “Just something about her presence and love that makes the world a better place❤️😭 #iloveyou” Well, fans heard that Savannah and Nic Kerdiles broke up permanently recently. So, probably, Savannah feels happy that her niece is on hand to cheer her up.

In her post, Savannah also added, “HOW does she have the most perfect teeth?!” That prompted the arrival of teeth trolls who feel nothing wrong about trolling on little kids either. Actually, most people hold those with the desire to troll on kids in great contempt. But, that doesn’t stop them from popping up their ugly heads. As one fan wrote, “I hate when adults are so rude and negative towards kids 🙄.”

One Savannah Chrisley troll wrote, “Those are fake teeth. come on now!” Another one chipped in with, “Right! Look at her old pictures & look at her teeth…obviously veneers.” And, it escalated with comments like, “More like money and a good cosmetic dentist. They all have fake teeth. LOL 😆.”

Those fans disgusted with people who troll on kids about their teeth fought back. One of them commented, “She’s a freaking child. Grayson has braces so i highly doubt a 6 year old has veneers.” And another person pointed out, “Jealousy is all it is. If they made Grayson do braces I dont see them getting Chloe new teeth. Money definitely helps with regular checkups and what not but, some just have perfect teeth. I definitely wish I was one.”

What do you think about Savannah Chrisley posting a cute photo of her niece Chloe, only to attract teeth trolls? Sound off your thoughts in the comments below.