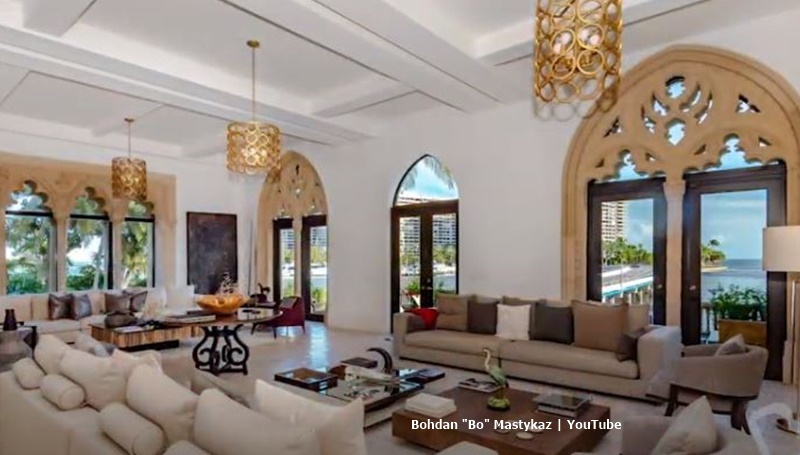 Marrying Millions fans know that Bill owns a massive mansion in Coconut Grove, Miami. Actually, the magnificent waterfront property features on the Lifetime show quite often. Well, fans who watch Bill and Bri navigate their relationship on TV could have the opportunity to enjoy their lifestyle. Recently, he listed it for sale. But, you need a rather large wallet if you wanna live there.

Marrying Millions – Bill and Bri and their home-life

Multi-Millionaire Bill Hutchinson’s much older than Brianna, affectionately known as Bri. If you don’t know, he’s the older guy with long hippy-style hair. Recently, fans saw that Bill got nagged by Bri to let her mom live with them. Apparently, it came after someone got stabbed in her mom’s neighborhood. In fact, fans grew really irritated with mom Sherry, and some accused her of flirting with Bill.

In the last episode of Marrying Millions, fans saw Sherry talk about sleeping with no clothes on. Righteously, many people thought it very inappropriate. After all, who talks to their son-in-law about that sort of thing? Well, if she tried making a move on his moolah, who could really blame her? Definitely, he’s loaded and they live in luxury. Not that her dog gives one darn hoot about that. In fact, it pooped on a very expensive carpet.

Yahoo carried a story by People, that revealed the home, (12,000-square-foot) got listed with “Chad Carroll and Matthew Dugow of Compass.” The price tag for Bill Hutchison’s home sits at “$8,250,000.” In 2018, Bohdan “Bo” Mastykaz on YouTube revealed its value at 9.5 million dollars. Apparently, the 11-year-old mansion with its gothic architecture and “modern finishes,” blends “Old World and new.” And, with six bedrooms and seven bathrooms, there’s plenty of space for the most amazing weekend parties in Miami.

Marrying Millions fans with pots of money could entertain in the “great hall.” Or, chill with friends under the pastel shades of “stained glass windows.” Then, why not take the elevator and relax on the “rooftop sundeck?” Done with that? Head out to the “keystone-edged infinity pool.” Well, naturally, Bill’s mansion ranks among the top properties. After all, he makes his money in real estate development

Bri and Bill met about three years ago. In the first season of Marrying Millions, the show mainly focussed on Bill’s elite friends frowning on his relationship. In this season, fans see Bill figuring out if a lifetime with Bri really matches his heart’s desire. They navigate through a few tense moments followed by luxurious getaways to mend things between them. But, with that mansion on hand, why would you go anywhere else? Sound off your thoughts in the comments below.

Kaley Cuoco Thanks Fans, ‘Truly Touched’ By Love And Support Over Loss Of Dog Norman
‘Stranger Things’ Star Teases New Content–Prepare For A Scary Season
‘Saved By The Bell’ Star Diagnosed With Stage 4 Cancer
Is The ’90 Day Fiance’ Universe Missing From Discovery+?
Tori Roloff Talks About ‘Madness’ In Her Life