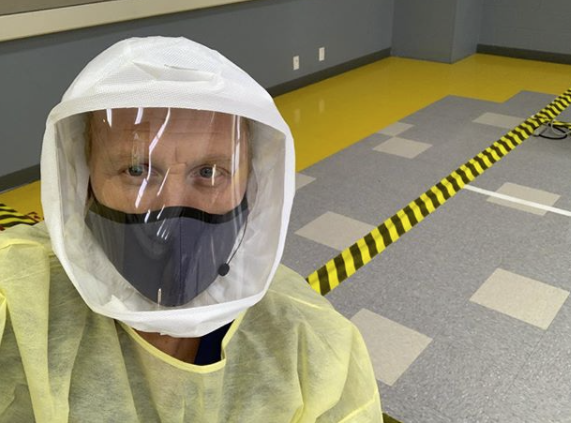 It’s been a long time since fans visited the halls of Grey-Sloan Hospital. Earlier this month, Grey’s Anatomy stars confirmed filming resumed. Many actors posted selfies from the set, dressed in their scrubs and ready to go.

“@kimraver and me partners in crime !! We r back !! @greysabc” Kevin McKidd (Owen Hunt) posted.

@kimraver and me partners in crime !! We r back !! @greysabc

Now, ABC confirms official airdates for several of its shows, included our beloved Grey’s. Thursdays are about to be great again. Season 17 kicks off on November 12 with a two-hour premiere special. Are you excited?

Grey’s Anatomy Has A Lot To Cover This Season

When Season 16 ended in April, there were many loose ends. When we last left our doctors, Richard had just been diagnosed with cobalt poisoning. Andrew had a major meltdown and Owen realized Teddy had been cheating on him throughout their engagement. Amelia gave birth to Link’s son, so at least there was one plot point to be happy about.

Ellen Pompeo teased fans on Twitter that there will be plenty of fun and romance in addition to the Coronavirus story.

Yes I have a new favorite couple not sure what you’ll call them …but they are adorable you guys can have fun guessing who !! https://t.co/abmZBafh7D

COVID-19 Almost Didn’t Make It To The Storyboards

Krista Vernoff admits she wasn’t sure she wanted to add COVID-19 to the list of Grey’s storylines. After all, it’s a very dark topic and it’s still ongoing.

“I spent the whole hiatus kicking the idea around. I came into the writer’s room thinking that I had made the decision we were not doing it,” she said. Pandemic fatigue had gotten the best of her.

However, after speaking with other Grey’s writers, she changed her mind. The creative team quickly began consulting with real-life doctors and their experiences during the pandemic.

“They were saying things like, kids, their first year out of medical school, are seeing more death in the first year than many doctors see in a decade. It just felt like we had to tell this story. We have to tell this story, and so the conversation became, how do we tell this very painful, brutal story that has hit our medical community so intensely. As they keep saying, permanently changed medicine? How do we do that and provide some escapism? How do we do that and create romance, and comedy, and joy, and fun?” Vernoff said.

November 12 isn’t that far away when you think about it. For now, take comfort in the fact you know when Grey’s will officially resume. We can’t wait to see what will happen next.