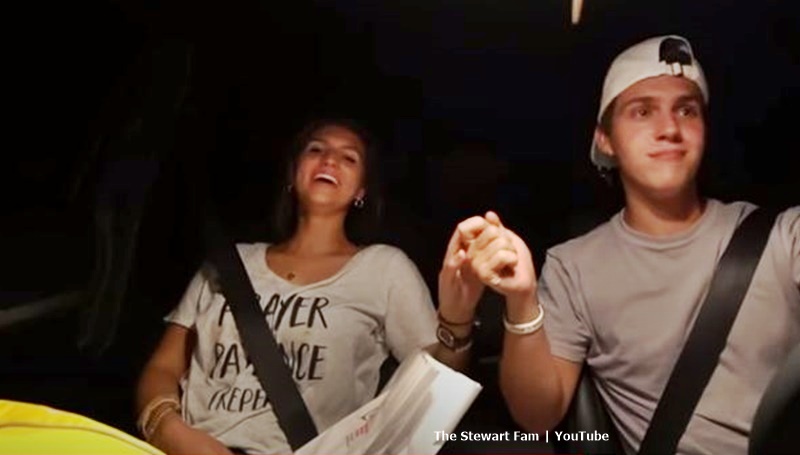 Carlin Bates and Evan Stewart celebrated their first anniversary in May this year. Back then, she shared a very sweet message about Evan and her wedding day. But now, she really poured out her love for her husband in a very long Instagram post.

Carlin Bates and Evan Stewart found something very special together

Over on her Instagram, the Bringing Up Bates star shared a really nice photo of her standing with Evan. She gushed about their love for each other and fans found it very touching. Her long caption read in part, “As we stand here looking out over the church property where we met, my heart is full. I’m so thankful for this life with you, Evan!” Then, she spoke about the special “privilege” of going to church for worship togther.

Carlin also loves it that they raise their daughter Layla ” in the Lord.” Admittedly, Carlin agrees that neither of them make the perfect person. But, she believes they always come back togther beause of those “imperfections.”  And these best things in her life comes from marrying Evan. Actually, she feels that the marriages people see “in the movies” mean nothing. She loves the marriage that she and Evan share right now. Even so, she feels that they worked “very hard” making their relationship work so well.

Right toward the end of her loving message, Carlin Bates noted, “Thank you for making much of Jesus in our home and for making every day a new and wonderful adventure. I love you, Evan, with all my heart!!” Awww, well that sounds like a lovely tribute. Many fans agreed on that. One Bringing Up Bates fan commented, “Gorgeous couple inside and out! 💗💙.” Actually many fans commented on how Jesus makes the perfect marriage.

Lots of UPtv fans thanked Carlin for reminding them about keeping the faith in married life. One of Carlin Bates’ fans noted, ” You guys are so adorable! May God continue to guide your paths and keep your marriage and family strong💕.” Then, someone commented, “Such a wise and beautiful testament to God, and one another ♥️🙌🏼♥️.”

As we stand here looking out over the church property where we met, my heart is full. I'm so thankful for this life with you, Evan! There is nothing like having the privilege of holding your hand as we worship Jesus together. There is nothing like loving our daughter and raising her in the Lord. There is nothing like being married to you. I know you're not perfect, and I'm not either. We have failed the Lord and each other many times, but it's our imperfections that keep bringing us back to the cross where we belong. Jesus is our greatest example, and I'm so happy to follow Him with you. I don’t want the love stories you see in the movies…I want what we have. I want the imperfections that keep us seeking God with our whole hearts. I want the hard days to remind us of how wonderful the mercy of God is. I want the easy days to remind us of how hard we have fought to get to where we are today. I want the simple days to remind us of how grateful we are to have each other and the blessings God has given us. This is the life I want…building a family that  proclaims the goodness of God. Thank you for making much of Jesus in our home and for making every day a new and wonderful adventure. I love you, Evan, with all my heart!!

Fans also noticed that Carlin looked really attractive in her outfit that she wore to church. The deep red flowers against the black material looked rather stunning, they thought. Evan wore a tie with red in it and his black suit really fit nicely with Carlin’s outfit. One of her fans said, “Carlin, you’re absolutely gorgeous. Also, has anyone ever told that you look like Jessie James Decker?”

Well, if you don’t know, Jessie is famous as an American country pop singer-songwriter, reality television personality, fashion designer, and entrepreneur. And actually, in her happy post about Evan, Carlin Bates does look a bit similar. Do you agree? Sound off in the comments below.