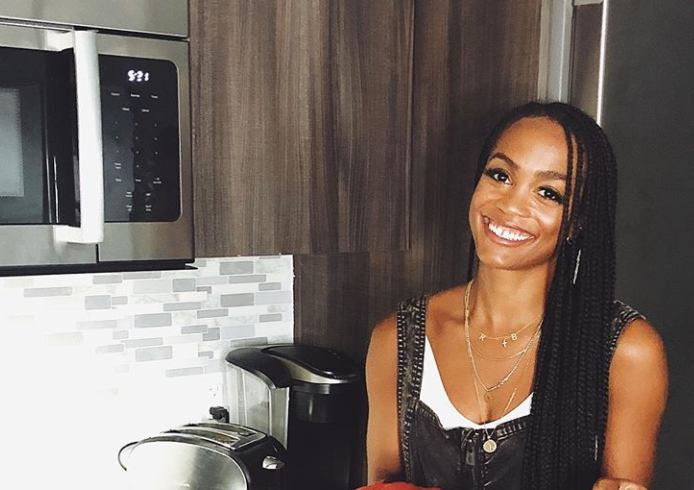 Rachel Lindsay spoke with her co-host Becca Kufrin on their podcast, “Bachelor Happy Hour,” and said she had something to tell her. Lindsay said it would, “probably be a shocker to so many people.” She told her, she’d spoken to Peter Kraus.

When Rachel had the spot of lead on The Bachelorette, Kraus was the runner-up. Lindsay chose her now husband, Bryan Abasolo in the end. The last time she’d spoken to him was after the end of her run. That took place in 2017.  About her man, Bryan Abasolo, Lindsay said, “he got the first impression rose. We’ve had a strong connection from the beginning.” With Kraus, she said his walls stayed up.

What Did Rachel Lindsay Say About Her Conversation?

Rachel Lindsay said, “we’re adults here, we can all move on,” about speaking to Peter. Lindsay said he reached out to her about the Black Lives Matter movement. She said, “he was asking me questions about it and stuff for some advice about responses he had gotten.” In the past Rachel said, “my audience on social media does not look like me. The majority of my audience is white women, and I have a lot of people who are looking at me.” According to E Online, she said the show put her in the position to reach those people. Without the show she doesn’t feel like she’d have that opportunity.

Lindsay didn’t detail what exactly they talked about. She said the conversation almost led to them following each other. She said, “we almost hit that follow button, but it would just turn into something that it shouldn’t.” To the fans who tell her she was really into Peter she reminds them, “like, guys, I’m married now.” She pointed out they just celebrated a year of marriage.

Honestly, this week I was drowning between a new job, 2 podcasts, filming for Ghosted, and a cross country move. But as I reflect on it all, I am beyond happy because I am doing what I love 💛. Feeling grateful and blessed and taking a little time for myself tonight. Be sure you make time for you in your day! Dress: @aliceandolivia

Though they hadn’t talked, Peter had kept up with Lindsay. He told US Weekly two years ago, “My feeds are full of Bachelor information. She’s still very much in the press, and so I see it from time to time. I’m happy for them.” He admitted he had some hard times after the breakup, but was not full of regret.

Rachel Lindsay recently posted on her Instagram about how busy she is. She said, “honestly, this week I was drowning between a new job, 2 podcasts, filming for Ghosted, and a cross country move. But as I reflect on it all, I am beyond happy because I am doing what I love.” In another post she said, “it’s a running joke that I have like 55 jobs.” Fans can look forward to what Lindsay’s opinions are of the new Bachelorette since it’s shaping up to be a wild season and it hasn’t even started.