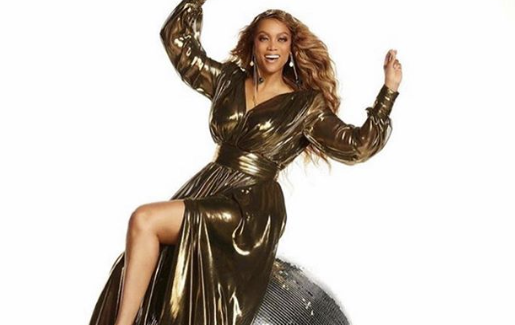 Fans made it clear they’re not in love with Tyra Banks as the new Dancing With The Stars host. As a result, it really seems like she is stepping on eggshells. She recently told PEOPLE she got rid of some of the plans she really wanted to do.

“Dancing with the Stars is one of the biggest shows on TV, with a huge audience, and I really respect that,” said Tyra. “I can’t come in with a battering ram and try to change everything. That would be a bad business decision and dumb leadership. So I’m not doing that.”

She went on to say that she did some research, listened to fans, and ultimately decided to scrap many of her ideas. Part of that, she said, was out of respect for former host Tom Bergeron.

“I have serious shoes to fill,” Tyra said about her predecessor. “I have respect for him. And when the network called me, I sat on it for a very long time, because I knew what Tom had done. The host is the ringmaster. And I thought, ‘Can I bring something fresh and exciting?’ I called my mama and she said, ‘You need to do this.’ So I’m going to bring what I bring!”

Although I do miss Tom and Erin, @tyrabanks is doing so great hosting a live show with a bad laugh track. #DWTSPremiere #DWTS

Even so, you can’t please everyone. No matter what Tyra Banks tried, fans seemed unreceptive. Many felt the season promos focused too much on her instead of the contestants. Do you agree or disagree with their feelings? Don’t forget to let us know. We’re curious to see what you think.

So What Actually Happened On DWTS This Week?

If you missed out on the season premiere, we wrote up a recap for you to enjoy.

Right now, Skai Jackson and her partner Alan Bersten are tied for first with Justina Machado and partner Sasha Farber.

Carole Baskin, Chrishell Stause, and Charles Oakley round out the bottom three. As expected, Dancing With The Stars show execs saved Baskin’s performance for last, knowing the delay would keep fans watching.

One of the strangest aspects of the night was the applause track. Dancing With The Stars execs announced they would not allow a studio audience during the Coronavirus pandemic.

What do you think of Tyra Banks as the new host? Please share your thoughts with us. Love her or hate her, Tyra is confident she can do an excellent job and will have plenty more to bring to the table.

Dancing with the Stars will air on Tuesday, September 22 this coming week. However, it will return to Monday nights for subsequent weeks. Don’t forget to tune in and see what happens next.