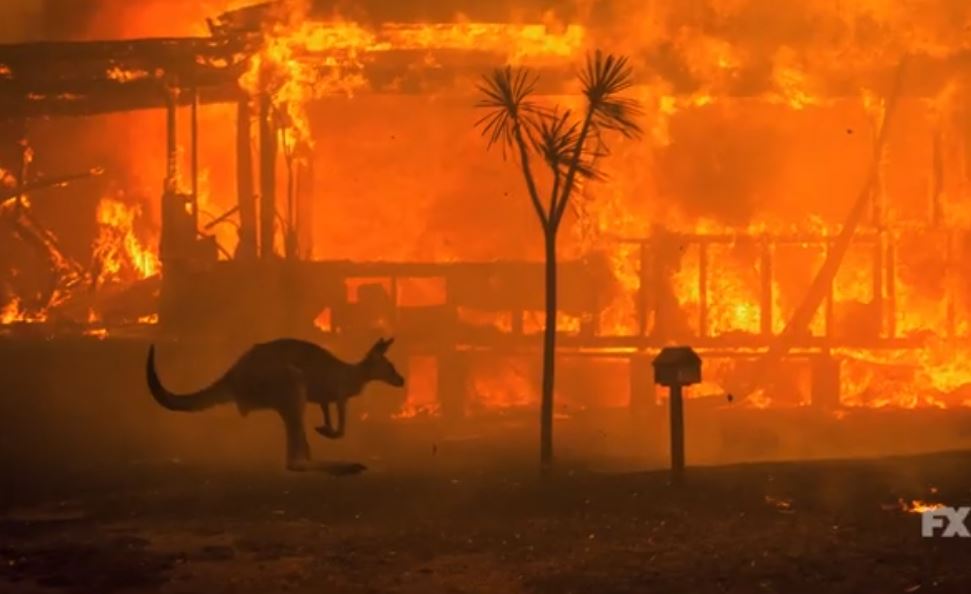 Hurricane of Fire is a documentary airing this Friday on FX and FX on Hulu.

In the “land down under” Oz summer of 2019, those of us located up in the northern hemisphere were getting our winter clothes in order and preparing for the cold.  But down below in Australia and New Zealand, it was their summertime and one of the hottest and driest ever recorded.

By the time 2020 arrived, Australia rang in the New Year with much of the country engulfed in flames.

The documentary Hurricane of Fire from producer/director John Pappas is a chilling first person accounting by real people who lived through hell on Earth.  It is presented by FX and Hulu in The New York Times Presents, a new documentary series from the team behind The Weekly which explores breaking news, investigations and character-driven stories and feature reporting from journalists at The New York Times.

In this no miss documentary airing this coming Friday, that is timely considering what is happening at the moment in the USA.

In this film, we hear the survivors’ tales, those who rode out the firestorm and how they did it, and also from the first responders and how tackled this ferocious inferno in wild and never before seen footage from inside their trucks.

At first it seemed that people were oblivious to the danger. Hurricane of Fire is not just a story of a horrific fire but of the Aussie people and how they made it through, and how they are coping after the losses.

New South Wales right after Christmastime in early 2020 was hot, reaching 50 degrees celsius which is 122 fahrenheit. It was the summer season for Australia and yet the heat and winds were unrelenting.

A dry lightning strike hit back in November, and the subsequent fire grew splitting off with floating red hot embers drifting about and lighting more and more of the land. Hundreds of fires. The government intervened and ordered people on holiday to leave the area. Evacuation orders were extreme and to the point, with officials saying that if you do not leave, you will die.

In a series of interviews with people from the area from different walks of life, we are presented a chilling first person accounting of this recent disaster. Most hair raising is the chain of events retold by a father and daughter who worked together to try to save their home. Their valiant efforts and preparation were subsumed by the size of the fire, as it became utterly unmanageable.

In separate interviews, the young woman shows us her family’s subterranean shelter and she and her dad watch the blaze in the distance, they look backwards and see that embers have sparked a fire behind their home. The footage we see in this live in the moment firestorm is heartstopping.

Not only is this documentary footage authentic, but the various injuries people sustained while protecting themselves and finding the safest places to hunker down are revealed. People were cooking inside their shelters as the fires roiled right over their homes. Fires raged at 600 degrees celsius (1112 fahrenheit) and to give some perspective, bodies are cremated at 1400 degrees fahrenheit.

Also, they share how fires this size consume all the available oxygen as people recalled how the air was sucked right out of their lungs. Thousands of birds dropped right out of the sky, asphyxiated in flight. One man had a canister of oxygen and opened it while he shared his bathroom with a neighbor he saved and her two beloved sheep. They recall hearing the wild animals screeching outside as they were being burned alive.

The fire was a storm, creating its own weather and wind and spewing fireballs like bombs, exploding over homes. We see how the first responders fought their way through these mercurial flames and blazing swaths of land to get to people, while those who had escaped and obeyed the evac orders were cloistered at the beach fronts, unable to navigate anywhere away from the water’s edge as the fire hemmed them in from every angle.

After watching this, you will have profound respect for all the firefighters and police who are working together in Oregon, California and Washington at this very moment to secure property and save lives of people who live in more remote areas.

Whether it is hurricanes and floods, tornadoes and earthquakes, all disasters are heart wrenching for people to endure, or lose lives and property. But it is the stories of these brave people who weather through them, and in the case of this film, how they think things through in the moment and do the right things to survive that make for compelling storytelling.

This mesmerizing and important documentary is a testament to the tough people down under who fought hard, lost much and relieved the experience as a caveat to all of us, nothing is guaranteed in this life, and your fortunes can change on a dime.

Perhaps these fires can be described as a fitting start to the annus horribilis that is 2020.

The New York Times Presents is a series of standalone documentaries powered by the ethical journalism and insight of The New York Times, bringing viewers the facts to the essential stories of our time.

The New York Times Presents brings a new documentary feature with investigative reporting on some of the most pressing issues of our society in a visual and unforgettable way. It is produced by The New York Times and Left/Right, a Red Arrow Studios company. Executive producers are Ken Druckerman, Banks Tarver, Mary Robertson, Jason Stallman, Sam Dolnick and Stephanie Preiss. The series is from the team behind the documentary series The Weekly, a collection of 30 half-hour documentaries and The Times’s first major foray into television news, currently available on Hulu.

Hurricane of Fire premieres Friday, September 18 at 10 p.m. ET/PT on FX and FX on Hulu