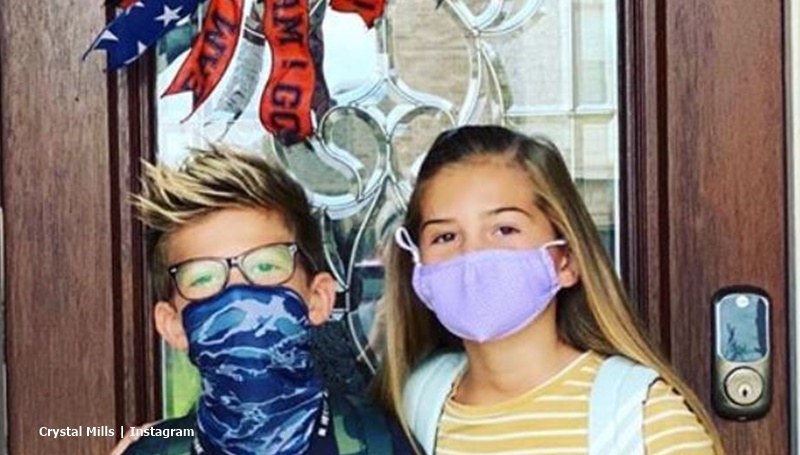 OutDaughtered cousin McKenzie ended up in the ER after she collided with her brother’s baseball bat. However, it looks like she’s all mended now. Her mom, Aunt Kiki shared a photo of her with her brother Bronson on back-to-school day. Actually, it looks like the pretty young girl might have the stitches out already.

Before her accident with the baseball bat, we reported that the kids went back to school. But, they attended virtual school from home. Meanwhile, the quints started back a real school. McKenzie’s going into fifth grade now and her brother Bronson into second grade. But now, the kids go back to real in-person school. So in another photo they stood with their masks on.

The OutDaughtered aunt captioned her photo with, “And they are off….my kiddos are headed back to in-person school! Let’s do this! Good Luck to my sweethearts today! 💜💕💙” But, in the hashtages, she noted that she’s done with being a teacher and now the hosue is quiet. Plus, she rayed for a safe day. Well, as many kids return to in-person school, many moms and dads pray the kids stay safe.

In the comments section, fans noted that McKenzie looks all better now. One said, “I see her head looks better! Thankfully it was only minor!” Plenty of other fans wished the kids good luck. After all, it’s been a long stay away from the classroom. Then, those fans whose kids don’t return yet, look forward to the day. Obviously, with the coronavirus around, it’s quite worrying. But, kids love meeting up with their friends.

One OutDaughtered fan wrote, “Congratulations to both of you as parents watching their children return to some kind of normal during these trying days. I’m so glad that you share your lives with your family and in laws on the tv show.”  Others talked about kids and schooling. Actually, KRON reported that many people struggled with homeschooling. And, they probably now hold a better appreciation for the teachers.

Blayke Busby stayed at home a  bit longer than her sisters. But, like her cousins, she also went back to school this week. Adam Busby shared on Instagram that the house suddenly went quiet. He looked a bit forlorn. Getting back to school’s not only a change for the kids but for the parents as well. Actually, it’s pretty much been a topsy-turvy world in 2020. As fans of Outdaughtered noted, some sort of “normal” sounds like a good thing.

Did you or your kids start in-person school again this week? Or, did you homeschool and now find the house is way too quiet? Sound off your feelings in the comments below.