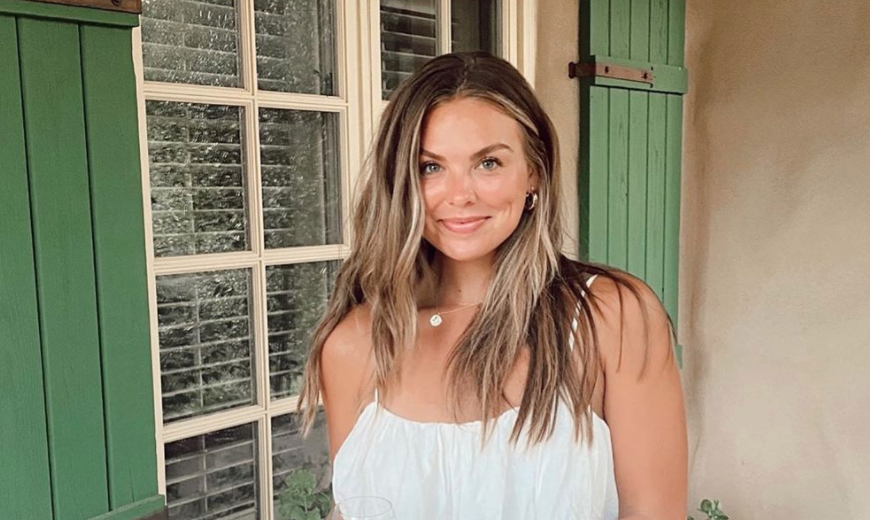 Tyra Banks hosted Dancing With The Stars last night. Some people liked her and some didn’t. Hannah Brown is letting fans know her thoughts on Twitter.

Not only was Hannah Brown The Bachelorette, but she was also the winner of Dancing With The Stars last season. Now, she has been tweeting her thoughts on the new season. One of those things includes if she liked Tyra Banks as the host of the show. According to Hannah, she thinks she did a great job.

“Although I do miss Tom and Erin, @tyrabanks is doing so great hosting a live show with a bad laugh track. #DWTSPremiere #DWTS,” Hannah tweets to her followers.

Anyone who watched the season premiere last night may have noticed a few changes to the show. The judges sat six feet apart, there were no fans in the stands and there really was a bad laugh track playing the entire time. It seems like Tyra really did try to make the best of the situation. However, some fans in the comments didn’t agree with Hannah.

“She was a hot mess. #bringtomback,” one person says.

“Absolutely will not watch DWTS without Tom and Erin. ABC made a huge mistake and reading most of the Tyra reviews, I can honestly say I made that decision. Glad I didn’t waste my time,” another writes.

“I thought Tyra was awful honestly. Fumbling everywhere. Bring back Tom and Erin!”

So, it sounds like Hannah brown may be alone in her opinion of Tyra. Hopefully, Tyra is able to earn the love of some more fans as the season goes on. After all, it has only been one episode.

Although I do miss Tom and Erin, @tyrabanks is doing so great hosting a live show with a bad laugh track. #DWTSPremiere #DWTS

DWTS isn’t the only thing Hannah has going on. She also posted on Instagram about a virtual birthday party she will be hosting. Apparently, fans are able to celebrate her 26th birthday online with her this year from the comfort of their own homes.

“I’m having a party!! 🥳 And y’all are invited! Join me and some friends for a virtual LIVE show on Thursday, September 24th to celebrate my 26th birthday. 🎂 And I’m excited to share that a portion of ticket sales will go to the Children’s Miracle Network Hospitals. ❤️ Get your tickets from the link in my bio! Limited meet and greet tickets available too!
➡️ http://onlocationlive.com/hannahbrown,” Hannah shares on Instagram.

It sounds like this will be a pretty exciting event for anyone willing to buy tickets to attend.

Do you like Tyra on Dancing with the Stars? Let us know what you think in the comments. Come back to TV Shows Ace for more news on all of your favorite Bachelor Nation stars.

Danielle & Adam Busby Celebrate 15 Years Of Marriage: See Photos
Chelsea Houska Catches Heat For Editing Photos Of Her Children
Tori Roloff Gives EXCITING Update On Lilah Ray’s Eye Condition
Javi Marroquin Calls Cops On Lauren Comeau For Abuse, Guess Who Has His Back On This?
Wait, What? Does Isabel Roloff Plan To Raise Her Baby In A Van?