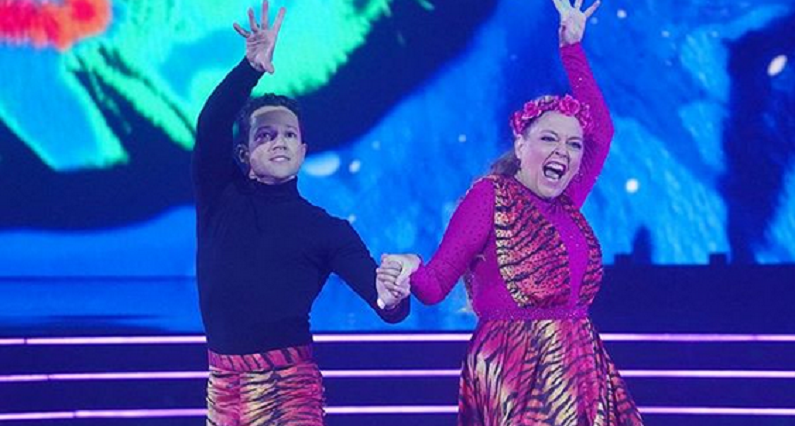 DWTS premiered on Monday night, September 14. The show went on without a live audience. Viewers could immediately tell since there was no audience in the ballroom. Dancing With the Stars Season 29 kicked off on Monday night with several changes, including new host Tyra Banks.

But that’s not all. Due to the coronavirus pandemic, there is no live audience. Hearing the fake boos and cheers annoyed fans at home. ABC and the show’s producers used fake audience noise to reduce the awkward silence. There were even fake boos when the judges criticized some of the celebrity contestants.

But fans didn’t like the noise effects. Here’s what they had to say.

Dancing With the Stars producers thought using a fake audience was clever. Producers wanted to make up for the lack of a live audience during the Season 29 premiere. But fans were aware of the fake cheers and they didn’t like it. Although the sound got the dancers hyped at the beginning of the episode, it annoyed the fans at home.

Just minutes into the premiere, fans shared their frustration on Twitter. They already noticed the fake cheering. Others were wondering where the noise was coming from. Some said it was much too loud.

“Dancing with the Stars needs to stop that horrific clapping track right now,” one Twitter user wrote. “YOU CAN’T HEAR ANYTHING ELSE.”

While hated the fake audience, others questioned the sound issues. Some users complained that they couldn’t hear new host Tyra Banks.

“How is the non-existent crowd cheering so loud I can’t hear Tyra?” another fan asked.

Tonight's the night 🤩 Put on those dancing shoes for a night of #DWTS at 8|7c on ABC!

A majority of DWTS fans thought the live audience was too noisy. They asked the producers to turn down the volume.

“The fake audience sound needs to be lowered just a tad bit #DWTS thank you!” one tweeted.

“Can they turn this ‘applause’ track down?” another added.

“They need to calm down with the canned audience,” a third user chimed in.

The official DWTS social media accounts did not address the issue. Producers didn’t listen to the viewers on turning down the volume. It looks like this will be one of the many problems that producers will have to correct in future episodes. Fans are hoping to hear Tyra and the panelists throughout the season.

This is the first season hosted by Tyra Banks. She replaced former DWTS co-hosts Tom Bergeron and Erin Andrews. Other changes include social distancing. The judges’ table was stretched out and the celebrities did not gather together on the balcony after each dance.

A bit of advice from our new judge @derekhough? Don't mess up! Tag your favorite celeb below to send them some Premiere luck! #DWTS

In addition, former pro dance Derek Hough replaced Len Goodman since he couldn’t travel to the U.S. due to travel restrictions. Fans didn’t just complain about the fake audience. They also shared their distaste for Tyra’s hosting abilities.

‘Bachelor In Paradise’ Brendan & Pieper Shock Fans On Instagram
Whitney Way Thore Defends Controversial Opinion About Chicken Wings
Scott Disick Is No Longer Keeping Up With Any Of The Kardashians
John And Abbie Duggar Share Rare Photo For Adorable Reason
‘Love After Lockup’ SHOCKING Spoilers: Are Stan And Lisa Still Together?