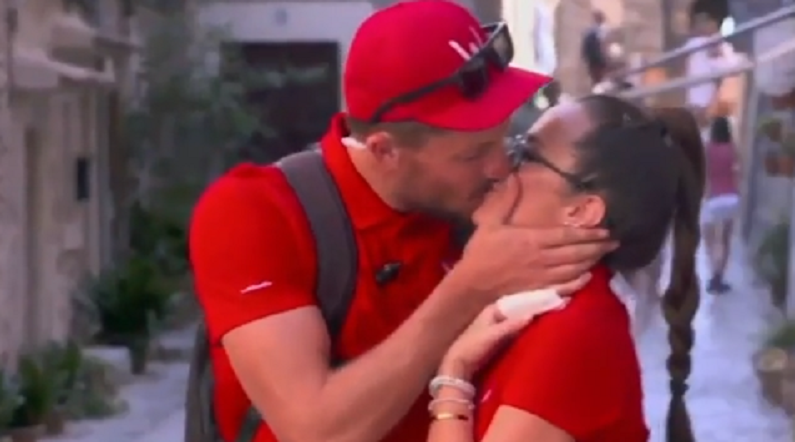 Below Deck Med star Jessica More thinks Rob Westergaard is like Joe from the Netflix thriller, You. During Monday night’s episode of Below Deck Mediterranean, Kate Chastain questioned Rob’s behavior. Viewers were taken back to the crew’s wild night out in Ibiza. Jessica didn’t like it when Rob was flirting hardcore with Aesha Scott.

Everyone had a crazy time. Some of them were too intoxicated to talk, let alone walk. However, that didn’t stop Jessica and Rob from arguing. She didn’t like it when he left her to spend more time with the new second stew onboard. The couple ended up fighting all the way back to their cabins.

Here’s what Kate and Jessica have to say about Rob.

Jessica compared Rob to Joe from YOU

Kate Chastain from Below Deck joined the conversation on Monday night. She’s been quiet for most of the season. That’s because she has a new show called Watch With Kate, which airs on Tuesday nights at 9 p.m. ET on Bravo. But she broke her Twitter silence to joke whether Rob was auditioning for a role.

“Does anyone know what movie Rob thinks he’s auditioning for? anyone?” Kate tweeted during Monday night’s episode.

Of course, the fan-favorite received hundreds of comments, including one from Jessica More.

“Not a movie, it’s the Netflix show YOU…” she tweeted.

Some of the Below Deck Med fans agreed. They took to Jessica’s tweet to share their support for the model.

“Whoa. Jess, I’ve been there. Super intense relationship leads to scary feelings,” one fan wrote. “Anxiety and rose colored glasses. With those glasses on, all the red flags can’t be seen!”

Does anyone know what movie Rob thinks he’s auditioning for? anyone? #BelowDeckMed

“You’re so strong, girl!” another fan wrote. “I’ve been there. You’re not alone!”

“Creepy McCreeper. Sorry, Jess. You can do better,” a third fan noted.

Meanwhile, Courtney Skippon from Season 6 of Below Deck had a different response. “He’s auditioning for the role of Kat in 10 Things I Hate About You,” she joked.

Many of the fans had great responses. “Rob believes he is auditionin for [a] lead in [a] Hallmark Channel Movie,” one person said. “I am waiting for him to recite Shakespeare and then jump into the ocean,” another person added.

One fan noticed the similarities between Rob Westergaard and Robert Pattinson from Twilight. “Twilight: At Sea.”

What's the last thing that made you make this face? 😂#BelowDeckMed

Another viewer had a different movie in mind, “Deadliest Catch: The Hipster Edition.” While another fan added, “it’s for sure a film adaptation of a Nicholas Sparks book.”

On the Below Deck Med After Show, Jessica didn’t hide her distaste for Rob. It’s safe to say the couple is no longer together. The yachtie explained their relationship intensified when he started texting his ex-girlfriend. Things worsened when he flirted with Aesha.

“It was probably six different things,” Jessica explained. “It was a lot of confusion. I just felt like I was being gaslighted the whole time.”

Now, she wished she could’ve gone back in time and trusted her insincts instead of following her heart. On Twitter, Jessica shared that her “intuition was screaming at me” the entire time. During her chat on the Below Deck Med After Show, she admits that she regrets trusting him.