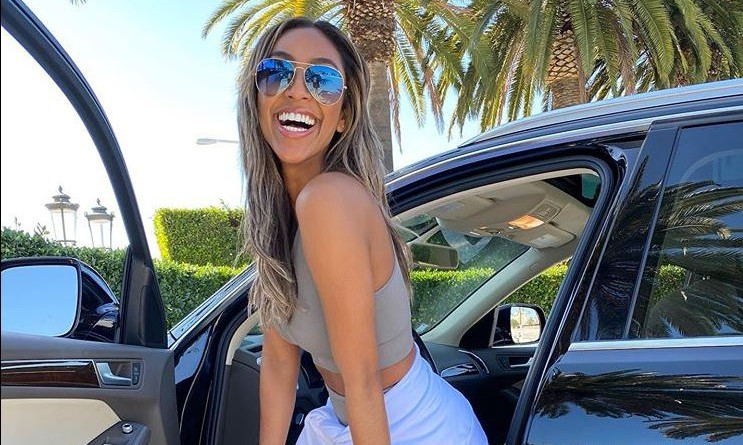 The Bachelorette Clare Crawley reportedly found love fast and threw in the towel or rather gave out a final rose. Tayshia Adams reportedly replaced her as the lead. Production has yet to actually comment on this and so far all the promos feature just Clare. However, she was seen at the resort and confirmed by many to be the second lead of the season. Now, filming is over and Tayshia is back on social media. And, fans already have a conspiracy theory about who may have won her heart. Speculation follows, but it is only speculation at this point.

Entertainment Tonight shared Tayshia’s big milestone and her feelings about it. She posted a birthday photo of herself. There is a big 30 balloon in the background and she is about to blow out her birthday candles. Tayshia captioned the photo, “I am 30, I am definitely flirty, And I’m fkn THRIVING!!! #alexaplaypopsmokedior #itsvirgoseasonbaby.”

Of course many think this means she is happy and possibly found love. Her fellow Bachelor alums commented how much they loved this post. Lauren Zima said, “Can’t wait to watch you thrive babe! ❤️👏 Happy birthday 🔥.” Mykenna said, “Oh you’ll be thriving that’s for sure !!! Can’t wait to see you shine and find your person 💛✨👏🏻 happy birthday babe !!!”

I am 30, I am definitely flirty, And I’m fkn THRIVING!!! #alexaplaypopsmokedior #itsvirgoseasonbaby

Cosmopolitan shared what could be a huge spoiler or simply just speculation. There really hasn’t been very much information released about Tayshia’s portion of the season. At one point, Reality Steve said families were being brought in for hometowns, but there were no concrete details.

So, what is this new fan theory? According to the report, there is one guy named Bennett Jordan who some fans have their eye on. They are basing their theories on when he returned to social media. They are also basing these theories on his bio and one of Tayshia’s stories. His bio says, “Clear Eyes, Full Hearts (+doughnuts and green juice), Can’t Lose.”

According to the report, Tayshia had also just posted some amazing looking donuts to her Instagram stories. This has fans wondering if this could be a subtle hint. Or perhaps it is absolutely nothing and they both just like donuts.

And, just to add more speculation, it was also shared that Bennett had unfollowed some people. He also deleted a few posts. Some think this means he knows his life may be thrown into the spotlight. If he didn’t win her heart, he may have at least made it far enough to be in Tayshia’s final three.

What do you think of this new theory? Stay tuned for more news as it becomes available.